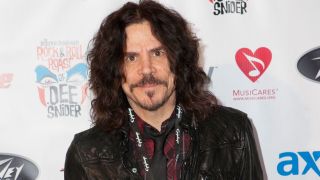 The rock veterans announced they’d split with Solinger after 14 years and moved quickly to bring in Harnell, who recently left Norwegian outfit TNT for the third time.

Harnell says: “I’m so excited and honoured to be a part of such a great band with an amazing legacy and legions of faithful fans. The guys and I have known each other for many years and this is such a natural fit. I look forward to getting out there and playing live together and being a part of making new music and creating our future together. It’s time to rock.”

On Solinger, who says he left to pursue his solo career, Skid Row founding guitarist Dave ‘Snake’ Sabo says: “We had a lot of great times together and created a lot of great music. We wish him nothing but the best.”

Bass player Rachel Bolan adds: “Sometimes things just end. People go in different directions and grow apart and you have to make a decision. He will always be our brother.”

The band say they never considered approaching Bach about a reunion once they’d parted ways with Solinger. Sabo tells Eddie Trunk Live: “It wasn’t something that we entertained. It’s just something that we didn’t even think about. Making a change for us was about getting somebody new.”

Skid Row will record the third chapter of their United World Rebellion series of EPs this summer.