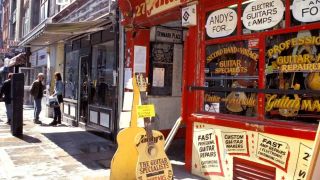 Buildings on London’s famous Tin Pan Alley have been officially recognised for their cultural significance by the British government.

Heritage Minister David Evennett says the decision to grant no.6 and no.7 Denmark Street Grade 2 star listed status is partly down to the fact they buildings were used as a studio and home by the Sex Pistols between 1975 and 1977.

The band’s frontman Johnny Rotten scrawled graffiti on the walls of the former silversmith’s workshop where they rehearsed. His drawings of Malcolm McLaren, Sid Vicious and Nancy Spungen still exist.

Evennett tells the Independent: “These 17th century townhouses not only exhibit well-preserved architectural detail but helped nurture Soho’s influence on the global music industry during the 1960s and 1970s.

“As we celebrate 40 years of punk, I’m delighted to be granting further protection to these buildings which acted as a home and studio to the Sex Pistols.”

Denmark Street is famous for its music shops and is currently undergoing transformation to become part of a new St Giles Circus development.