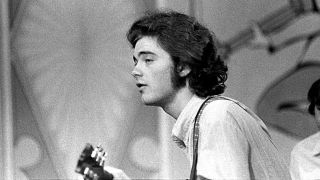 Roky Erickson, frontman of legendary psychedelic band the 13th Floor Elevators, has died at the age of 71.

The news was confirmed by his brother Mikel Erikson, who wrote on Facebook, "My brother Roky passed away peaceably today. Please allow us time. Music and laughter forever."

Musicians paying tribute to Erickson include Mark Lanegan, who tweeted, "Devastated to hear of Roky Erickson's passing. One of the reasons I began singing. A huge inspiration and giant in the history of rock. I used to call him every day in the 80's, he would actually pick up once every couple months and talk horror films with me. Such a loss. RIP"

Formed in Austin in 1965, the 13th Floor Elevators scored a regional hit in early ’66, with You’re Gonna Miss Me, a brutal proto-punk anthem written by Erickson. By October the single had crashed into the Billboard chart.

The following month saw the release of debut album, The Psychedelic Sounds Of The 13th Floor Elevators. Fuelled by Erickson’s extraordinary yelp and the lysergic gurgle of Tommy Hall’s electric jug, they sounded like no other band, before or since.

"That one stands as a literal mind blower," ZZ Top's Billy Gibbons told Classic Rock. "It alters the neurons when hearing it. Roky Erickson didn’t consider adhering to any traditional boundaries or formats. In fact, The Elevators became self-appointed pioneers of a psychedelic trip that seems to have the impact of lasting past the present."

After touring California with Quicksilver Messenger Service in early ’67, the Elevators were set for a breakthrough. But the album failed to make the charts. Their label, International Artists, began to panic, prompting them to organise a disastrous show in Houston, where Erickson was crippled by a mixture of anxiety and LSD.

By the time the band began recording a second LP, Easter Everywhere, they were falling apart. There had already been drug busts, now there were various legal wrangles to contend with.

Alas Easter Everywhere sold even less than its predecessor and by April ’68 the Elevators had played their last gig. Their demise was accelerated by the increasingly erratic behaviour of Erickson. His contributions to a final album, 1969’s Bull Of The Woods, was minimal.

It was all over before then anyway. Busted for marijuana that year, Erickson pleaded insanity to escape a jail term. He was sent to a mental hospital instead. He eventually ended up at Rusk Prison For The Criminally Insane.

Erickson attempted a solo career in the early 80s, but the years of incarceration had left him with severe problems. The demons he howled about on lurid songs like Two Headed Dog and Creature With The Atom Brain seemed way too vivid. He gradually returned to playing in public, and three years ago the 13th Floor Elevators played their first live show together in 45 years, performing  at the Levitation Festival in Austin, Texas.

Erickson’s battles with mental illness were chronicled in a 2007 documentary named after that first single, You’re Gonna Miss Me.

“I just enjoyed all my stuff,” he told Classic Rock. “I’ve been real particular about it because it’s been a choice to make. Would I do anything differently if I had my time over again? I think I would do the very same things.”

A cause of death has not yet been announced.

Devastated to hear of Roky Erickson's passing. One of the reasons I began singing. A huge inspiration and giant in the history of rock. I used to call him every day in the 80's, he would actually pick up once every couple months and talk horror films with me. Such a loss. RIP pic.twitter.com/6HE4HHsZnSMay 31, 2019