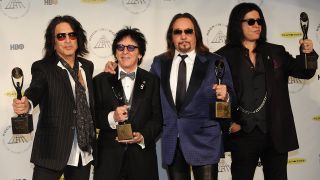 Paul Stanley has reflected on Kiss’ induction into the Rock And Roll Hall Of Fame in 2014 and has said that organisers treated the band “like crap” on the night.

The Kiss lineup of Stanley, Gene Simmons, Peter Criss and Ace Frehley were enshrined along with Cat Stevens, Linda Ronstadt, Nirvana and the E Street Band five years ago – but it wasn’t a happy experience according to Stanley.

Speaking with Florida station 95.7 The Hog, Stanley said: “It was validation for our fans who it meant the world to. Tom Morello (who inducted Kiss on the night) did a brilliant job. It was vindication in the sense that the Rock And Roll Hall Of Fame kept us out for 17 years, and were really left with no choice but to begrudgingly let us in.

“They treated us like crap, even that night. We had trouble – how about this? – getting into the arena. We had no idea about the rundown of the show or when we were getting on stage.

“It was disgraceful what they did, but we won. It’s the story of Kiss from the beginning – that people who believed in themselves and who were told what they were doing wasn't worth anything and wouldn't succeed came out on top. That’s a life lesson for a lot of people.”

Kiss are currently on the road across Europe on the latest leg of their mammoth End Of The Road world tour – and Stanley says they have an idea of where and when the run will come to an end.

He says: “We do have a final date pretty much planned and we’re not announcing it yet, but it would be crazy to have the End Of The Road tour that never ends, so yes, it does end!"

Last month, Stanley released his new book titled Backstage Pass: The Starchild's All-Access Guide To The Good Life through HarperOne. It's the follow-up to 2014’s Face The Music: A Life Exposed.

Paul Stanley: Backstage Pass
Paul Stanley has released the follow-up to 2014's Face The Music, which sees the vocalist and guitarist give fans an insight into his life as the frontman of one of the biggest bands in rock.View Deal