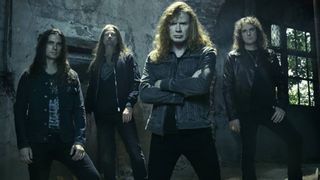 Mustaine says Megadeth were advised to grow beards and change their logo in the past – but insists he always had the final say on the band’s direction.

The frontman admits they took advice on revamping their image following the success of their 1992 album Countdown To Extinction – but says that it didn’t work for them.

Mustaine tells Bonfire: “There’s been some times where we were getting some suggestions from outside people, management, the label, so on and so forth, to try songs a certain way, and I think that when you stick to your guns, you have no one to blame.

“When you listen to other people telling you what to do and it doesn’t work out right, you can take the chickenshit way out and blame them. But I think the bottom line is, no matter what happened with us, I was the one who made the decision, so we’re in the place that we were because of me and my decisions prior to Dystopia.”

Asked what changes bosses suggested for Megadeth, Mustaine says: “It basically started after Countdown To Extinction where the logo changed, our look changed. We were supposed to start growing facial hair, and we were told, ‘Take the points off your ’M’ letters on your logo, get rid of your mascot and stuff.’ And we were, like, ‘Really?’

“You’ve gotta remember, Countdown came in at No.2 on the Billboard chart, so we thought, ‘Wow! This feels great. Now we’re starting to get some direction. This is how you’ll be great. You listen to people who have some credibility.’ And we did, but it didn’t work. And you don’t realise that people that have credibility aren’t always right.”

The band’s 1997 album Cryptic Writings didn’t feature the classic logo on the sleeve, with the follow-up, 1999’s Risk, also sporting a different font. On 2001’s The World Needs A Hero, the classic Megadeth logo reappeared.