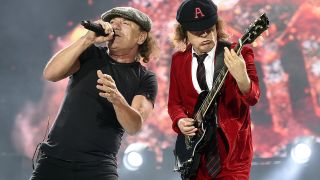 AC/DC classic Hells Bells has kept fans headbanging for 39 years and can be routinely heard at sports events to keep fans entertained.

But for police in Montana, the Back In Black track is being used, not to keep deputies rocking during their shifts, but to help clear bison from busy highways in West Yellowstone.

Posting on Facebook, Gallatin County Sheriff’s Office say: “Being a deputy around West Yellowstone comes with unusual duties, including herding bison off the highway so no one gets hurt.

“When deputies respond to a bison on the road, they turn on lights and siren and encourage the animal to leave the road with an air horn.

“With a reluctant bison, they’ve been known to play AC/DC’s Hells Bells over the speakers – that usually seems to work.”

Of course, the social media post has drawn some comments, with one suggesting Taylor Swift would be more effective, while another said the infinitely irritating Baby Shark would also do the job.

Given that the bison are being helped from the road, maybe Highway To Hell would be a better choice.