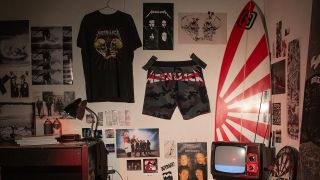 Metallica have teamed up once again with surf brand Billabong LAB for another collection of clothing.

The two previously joined forces back in 2007, with the new range featuring items that were designed around the band’s first five albums along with original concept art by artist Pushead.

Bassist Robert Trujillo adds: “There’s a lot of rage in metal, but it’s a good rage. It’s a great release, almost like surfing, out in the rhythm of the ocean.”

A portion of the proceeds from the collection will help support the Andy Irons Foundation in its youth outreach efforts. Professional surfer Irons, who was a friend of the band, died in November 2010 at the age of 32.

Vice president of Billabong’s global marketing Evan Slater says: “We’re so excited to draw on Billabong’s long-time relationship with Metallica to celebrate their tremendous impact on surf culture through this premium collection.

“Combining Metallica’s genre-defining album artwork and Billabong LAB’s forward-thinking apparel and wetsuit designs adds up to something far greater than the sum of all parts. We’re blown away with the results.”

The collection will hit retail over the course of the next six months. Check out a video and a gallery of product shots below.