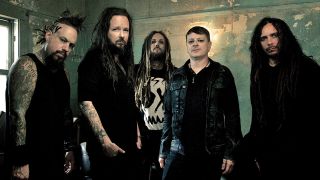 Korn frontman Jonathan Davis says that the band have begun laying the groundwork for their next album.

They released The Serenity Of Suffering in 2016, with Davis about to launch his solo album Black Labyrinth on May 25 via Sumerian Records.

And while he’s been working on the record and planning his upcoming solo tour dates, the vocalist has confirmed that guitarists James ‘Munky’ Shaffer and Brian ‘Head’ Welch have begun putting the first pieces in place for what will be their 13th studio album.

Davis tells on KLOS radio’s Whiplash: “I’m pulling double duty. Munky and Head have been writing with different people for a while now, getting songs together.

“We’ll all come together in Los Angeles in a studio. We're going to start writing some songs together for a week.

“They're going to keep writing and when I get back from tour, I'm going to jump right back in and write some more with them. Then we'll start working on the record probably late this year.”

Korn will play three shows in September to celebrate the 20th anniversary of their 1998 album Follow The Leader.

Davis will kick off the European leg of his solo tour with a performance at Germany’s Rock Am Ring on June 1.