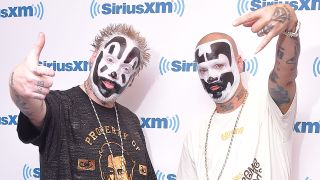 There are plenty of reasons why people may feel uneasy about the growing level of facial recognition technology currently being rolled out across the globe: it throws up all manner of privacy issues, can be inaccurate, plus it's just downright creepy.

However, there's great news for those hoping to evade the grasp of the surveillance state – you can apparently dodge military-level facial recognition software, like that recently purchased by Ticketmaster and LiveNation, simply by becoming a Juggalo.

A report by Yahoo suggests that Insane Clown Posse's dedicated fanbase – also known as Juggalos and Juggalettes – have inadvertently found a way to thwart facial recognition technology thanks to the distinctive way they paint their faces.

With facial make-up that often includes a black strap covering the mouth and obscuring the jawline, facial recognition technology is unable to map out the essential features it needs to recognise a face (such as the jawline) and is therefore rendered redundant when faced with a fully painted Juggalo.

i made a breakthrough. it turns out juggalo makeup defeats facial recognition successfully. if you want to avoid surveillance, become a juggalo i guess pic.twitter.com/kEh7fUQeXqJuly 1, 2018

for anyone wondering why some face changes evade facial recognition and others don't, here's a visualization of how landmarks are placed on a few examples. juggalo makeup is particularly effective as it basically totally redefines what is interpreted as the jawline pic.twitter.com/dFSx5FEGc9July 1, 2018

It is, apparently, this jawline issue which is causing the technology trouble, so heading out in your average corpse paint or painted like Gene Simmons isn't going to cut it. If you want to truly stick it to the man, the only way is to go full Juggalo.