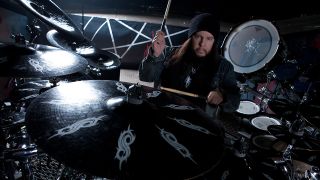 Joey Jordison has given an exclusive interview to the new issue of Metal Hammer – and he’s revealed he has a pile of unreleased Slipknot demos at home.

The band’s former drummer joins Corey Taylor and Shawn “Clown” Crahan in the new-look issue of the magazine, which celebrates the 10th anniversary of Slipknot's fourth studio album All Hope Is Gone.

Metal Hammer will hit store shelves tomorrow, but to get you in the mood, here’s an excerpt from the mag.

Jordison says: “I have a ton of Slipknot demos that I have at home. Maybe some day they’ll surface, maybe they’ll never be heard, but I don’t translate them to any other band, they still stay in the Slipknot safe.

“I won’t use them for anyone else besides Slipknot, if that ever happens again.”

Asked if he still writes music in the style of Slipknot, Jordison replies: “It depends. I play guitar all the time and I’m constantly thinking of songs.

“I sleep music. I wake up and there’s a riff in my head, every step I take there’s a riff, a beat, or something. That’s the way a musician is. You’re isolated in a weird way because music is haunting you as much as it’s loving you. It’s non-stop.

“Every time I pick up a guitar, I come up with different riffs, all different bands I’ve been in, sometimes there is a song or riff that could only belong with Slipknot and I just can’t use it for anything else, regardless of whatever happened.

“It just stays in the bank and I can’t use it for anything else, I just won’t do it.”

You’ll be able to read the full interview tomorrow in the new-look issue of Metal Hammer. In the meantime, you can check out the awesome cover art below.