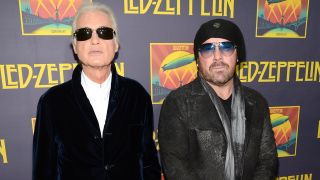 Jason Bonham has apologised to Jimmy Page after comments he made while a guest on Howard Stern’s SiriusXM show.

The son of late Led Zeppelin great John Bonham recalled an alleged incident involving drugs which was said to have taken place in hotel while the band were on tour when he was 16. He also spoke about a moment backstage involving drugs.

But the drummer has now retracted those comments and issued a personal apology to Page.

In a statement on his website, Bonham says: “On or about 9 April 2019 I, Jason Bonham, gave an interview on radio with Howard Stern. In that interview I made certain untrue and derogatory statements concerning Mr James Page of the legendary band Led Zeppelin.

“I unconditionally retract all derogatory and defamatory comments relating to Mr J Page that I made in that interview. In particular it is wholly untrue that Mr J Page offered me any illegal substances either when I was a minor or at all.

“I apologise to Mr Page, unreservedly, for making these unfounded and untrue comments about him.