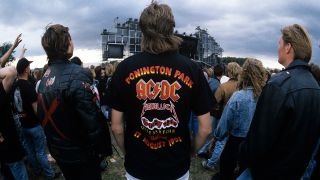 A book charting the history of Castle Donington’s famous Monsters Of Rock festival between its inception in 1980 through to 1996 is to be released in early 2020.

Spread across 600 pages, the official publication has been three years in the making and will feature hundreds of previously unpublished photographs, set lists, documents, memorabilia and more.

Monsters Of Rock will be released as a standard edition and The Full Metal Jacket Edition, which will be autographed by 16 artists including Judas Priest's Rob Halford, Saxon's Biff Byford, Bernie Marsden, Uriah Heep's Mick Box, Ricky Warwick and Fish.

The special edition will also be bound in embossed red leather and presented in a metal slipcase with 15 framable prints. A poster will also be included, along with a reproduction of the 1980 programme, a newspaper and a t-shirt.

Only 350 copies of The Full Metal Jacket Edition will be released.

Both versions will be available to pre-order from 3pm tomorrow (January 13) from Rufus Rock ’N Roll Publishing and will ship towards the end of January.