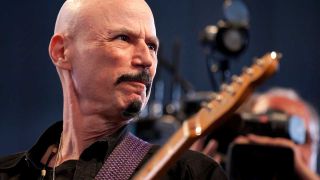 Kiss, Meat Loaf and W.A.S.P. guitarist Bob Kulick has died. He was 70.

The news was confirmed in an Instagram post by his younger brother and fellow guitarist Bruce, who wrote, "I am heartbroken to have to share the news of the passing of my brother Bob Kulick. His love of music, and his talent as a musician and producer should always be celebrated.

"I know he is at peace now, with my parents playing his guitar as loud as possible. Please respect the Kulick Family’s privacy during this sad time."

Kulick auditioned for Kiss in 1972 and lost out to Ace Frehley, but his association with the band didn't end there, and he later added guitar parts to Alive II, Unmasked , Killers and Creatures of the Night.

Kulick was also a member of cult AOR act Balance – who had a minor hit with Breaking Away in 1981 – and had a longstanding professional relationship with Diana Ross.

Guitarist Gus G. paid tribute, tweeting "R.I.P. Bob Kulick. I had the pleasure of working with him on a Randy Rhoads tribute album a few years back. My condolences to his family and loved ones."

Singer Jeff Scott Soto tweeted, "Ugh, another peer, colleague & someone I considered friend has passed. I worked with Bob Kulick on many recordings through the years, most notably the many tribute albums he produced."

Sons Of Apollo keyboardist Derek Sherinian wrote, "I am very sad to hear about the passing of Bob Kulick. I played on several tribute records in the 90s that Bob produced. My condolences to his family and especially Bruce. R.I.P."

In 2017 Kulick told Sleaze Roxx, "There are three things I would say, as a guitar player, that you need. The first thing is patience. Patience to learn, patience to move from where you are now and maybe moving to a band and career.

"The second thing is commitment. Commitment, so you can’t throw your guitar on the ground when you can’t play that right chord. Pick up the guitar and keep trying until your fingers learn the hand eye coordination.

"And the third thing is flexibility. Flexibility — the ability to know say, 'You know what, I need to set my sights on learning these chords before I learn this solo. I need to maybe play in a baby band and learn the ropes first before I play in a professional band.' Being flexible enough with stuff like that. Once you can do all of that, then I think you have a shot."

A cause of death has not been confirmed.