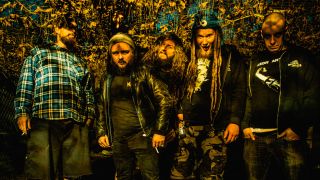 Metal Hammer is streaming the forthcoming album Dead Set from Aussie death metallers King Parrot ahead of its release next week.

Due for release on Agonia Records in Europe and EVP in their homeland of Australia, King Parrot have joined forces with Phil Anselmo’s Housecore Records for the North American release – which is bonkers. In fact, Phil’s chosen his favourite track for us from the album:

“It’s very tough for me to say which of the songs is my favourite off of Dead Set, for obvious reasons,” he ponders. “But I guess I’m partial to Need No Saviour and Tomorrow Turns To Blood. Both jam, but I could say this about the whole fucking record.”

In fact, the whole of the King Parrot crew gave their top tracks from the new album. Give it a listen below to see if you agree…

**Slatts (bass): Need No Saviour **“Basically I’m going down for a dirt nap nearly every night, and in death there is no saviour so fuck me, fuck you and how fuckin’ good is this song?!”

Youngy (vocals): Home Is Where the Gutter Is “If I didn’t have King Parrot I’d probably be in the gutter, so this song reminds me to be grateful for what I have. We just made a killer video for this one, too. Check it out!”

Toddy (drums): **Anthem Of The Advanced Sinner **“It’s high energy and all-round sick! It was one of the last songs we wrote and it really just fell together perfect.”

Squiz (guitar): Hell Comes Your Way “I favour this scorching little ditty because the technical intricacies of the obviously polka influenced cowbell solo,remind me of a deeply satisfying – yet scarily wet – fart!”

**Mr White (guitar): Punisher **“Only because marinated roo and roast vegetables is my go-to meal when I get home from tour.”

Some people have been having problems with the above stream, but don’t worry you can listen to Dead Set on Soundcloud.

Dead Set is available to pre-order at the following: