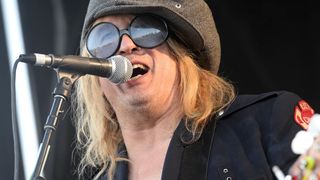 Enuff Z’Nuff have signed a deal with Frontiers Music Srl.

They plan on releasing the material this autumn – and mainman Chip Z’Nuff says it’ll feature some of the last recordings of Warrant singer and guitarist Jani Lane.

Z’Nuff says: “We are very excited with this new deal with Frontiers thanks to an old friend who discovered us – Derek Shulman.

“The new record is pure rock and features a couple of rockstar friends – most notably Styx’s James ‘JY’ Young and the late, great, Jani Lane singing on one of his last recording sessions.”

Some of the song titles confirmed are Good Luv, Radio, Nothing and The Devil Of Shakespeare, with Z’Nuff reporting the band are also planning a worldwide tour.