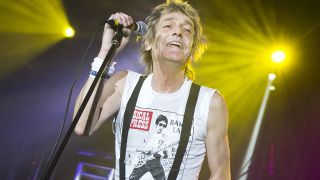 Eddie And The Hot Rods’ frontman Barrie Masters has died.

The news was confirmed on the band’s Facebook account, reporting that the singer had died suddenly, with further details to be revealed in due course.

The statement reads: “It is with extreme sadness we announce the passing of the legendary Barrie Masters.

"As you can expect, this sudden news is a huge shock to the band and family.

Eddie And The Hot Rods formed in Essex in 1975 and went on to release their debut album Teenage Depression the following year.

However, it was 1977’s Life On The Line album which saw the band hit the spotlight thanks to hit single Do Anything You Wanna Do under the name The Rods, which peaked at no.9 in the UK charts.

The band went through many lineup changes over the years, with Masters the only constant member.

Eddie And The Hot Rods also gave Sex Pistols their first show, when Johnny Rotten and co. opened for the band at London’s Marquee Club.

Reflecting on the show, which saw the Pistols trash the Hot Rods' gear, Masters told the Swindon Advertiser in October last year: “They couldn’t get any work so it came about through my manager and Malcolm McLaren.

“When they smashed up our equipment young Johnny Rotten had a severe telling that that’s not how to behave.”

Eddie And The Hot Rods toured earlier this year with Stiff Little Fingers and also performed at the Thunder In The Glens festival in Scotland in late August.

No cause of death has been confirmed.