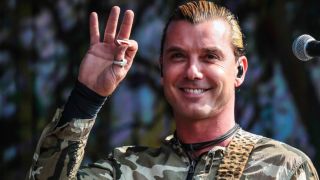 Bush frontman Gavin Rossdale has waded into the debate over the future of rock music – after Gene Simmons declared the genre dead.

The Kiss star recently claimed music had been “murdered” by those who refused to invest in the next generation of artists, and said illegal downloading had devalued recorded work to near-zero.

Now Rossdale tells Howard Stern (via Blabbermouth): “I don’t think it’s dead. Nothing is ever dead in music – it just takes the right record.”

He namechecks the Foo Fighters and Queens Of The Stone Age as bands who continue to push boundaries – and says he aims to do the same himself.

Rossdale says: “When I go in to make a rock record, the challenge to make it interesting and to make it matter to people is even greater.”

And he also believes studio work still has an important role to play.

He adds: “I sold a lot when records were selling and I’ve accepted that to make a record is like a calling card.”

Bush release sixth album Man On The Run next month.