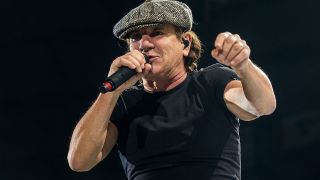 Brian Johnson has reflected on how he came up with the opening lyrics to AC/DC classic Hells Bells.

The vocalist was speaking with Dan Rather in the new series of The Big Interview, which will be broadcast on AXS TV on October 1.

Johnson and the band were at Compass Point Studios in the Bahamas in the spring of 1980 with producer Mutt Lange, pulling together what would become the Back In Black album, when Johnson had a case of writer’s block.

A tropical storm was rolling in, with Johnson telling Rather: “Mutt went, ‘Oh, it’s rolling thunder’ and I went, ‘Rolling thunder, pouring rain, coming on like a hurricane. There’s white lightning flashing.’

“I mean I literally was giving a weather report!”

He adds: “When great things are happening so quickly, you never realise, do you? It’s so fabulous. It just looks so easy. When you try to do it again, it never works!”

A total of 12, 60-minute episodes of The Big Interview will be broadcast on the channel from October until December, with musicians including Cheap Trick, Chicago, Poison’s Bret Michaels, Alice Cooper, David Byrne and Jon Anderson taking part.

Rather says: “It is a pleasure to have the opportunity to speak with these entertainment icons each week. It is a rare treat to be able to delve into a side of these artists that the public doesn’t often get to see, as they tell their stories and share their thoughts in their own words.

“I am humbled that the series has been so warmly received by AXS TV’s audience, and I look forward to showing our viewers what we’ve been working on in this upcoming fall cycle.”

In January this year, Johnson appeared to confirm he was back in AC/DC after his well-documented hearing problems, when he's reported to have told Los Angeles outfit Terrorizer that he had been “sick of denying it.”