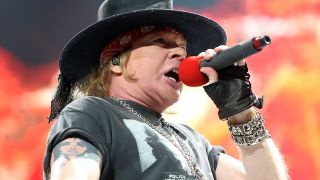 The singer was speaking to Atlas Etihad ahead of the band’s show in the UAE over the weekend, where they closed the Abu Dhabi Grand Prix.

“The band are the greatest because they embraced so many different styles.”

Rose also reported that a film soundtrack is something he’d like to work on at some point in the future.

He says: “Listening to movie soundtracks is a big thing for me. When you listen to stuff like Pirates Of The Caribbean and you get that blend of orchestra and modern instrumentation – it’s very clever.

“I have a lot of respect for the guys who do that. It is something that I would like to do at some point in the future.”

Guns N’ Roses played at The Freddie Mercury Tribute Concert at London’s Wembley Stadium in April 1992, with Rose joining Queen and Elton John to perform Bohemian Rhapsody and later teamed up with Queen for We Will Rock You.

Guns N’ Roses had to cut their set short in Abu Dhabi after Axl battled through illness. He told the crowd that he had to have “a bunch of injections” and had been sick for hours before the show.

They managed to play for close to two hours, but called the show off after performing November Rain.

The band’s next live performance is scheduled for November 29 when they’ll play the FNB Stadium in Johannesburg, South Africa. Following that, GNR will play at the Aloha Stadium Swap Meet in Honolulu on December 8.