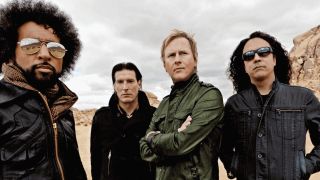 The Seattle grunge legends have been working on the much-anticipated follow up to 2013’s The Devil Put Dinosaurs Here with Korn/Foo Fighters producer Nick Raskulinecz.

“I’m still in the last few weeks of anxiety about screwing up this record,” Cantrell tells Guitar World. “The nitpicky and manic part of me keeps saying, ‘We’re not done yet!’ But we’re almost there. The finish line’s in sight.”

Cantrell says that the as-yet-untitled record features all the hallmarks of the classic Alice In Chains sound but adds new twists.

“It’s a record we haven’t done yet, I can tell you that,” he says. “But it’s also a record that has all the elements of anything you would expect from us. It’s got our fingerprint. There’s some really heavy shit, some really ugly stuff, some real beautiful stuff, some weirdo trippy shit… it’s good!”

The band have been recording with Raskulinecz in Seattle, Nashville and Los Angeles. According to Cantrell, they have consciously held back from revealing details about the album.

“It’s not that we were keeping it a secret – we just didn’t want to say a whole lot about it until we had something to say. And we certainly have something to say with this one. It’s a fucking strong record.”

The guitarist says the new album will be released “probably sometime this summer.” Alice In Chains kick off their US tour in May, and play two UK shows in June.