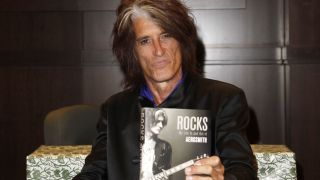 Joe Perry believes a higher power was behind Aerosmith’s decision not to hire the plane that killed three members of Lynyrd Skynyrd when it crashed in 1977.

Perry has recalled how his band backed out of hiring the same aircraft a week earlier. He tells Crave Online: “It was a terrible tragedy, and we just considered ourselves incredibly lucky. People were flying on all these different planes, and it was very common to be on a plane Fleetwood Mac had been on the week before.

“We’ve always felt there was somebody watching over us, and this was another example of that. People were put in our lives that helped bail us out for one reason or another. Fortunately we had someone looking at the plane that we would be taking, and he put his foot down.

“To be that close to it… it was really a blow, up and down the line. From knowing those guys, to the loss of music and beyond.”

Perry released his book Rocks: My Life In And Out Of Aerosmith in October and says he was inspired by autobiographies written by Keith Richards, Anthony Kiedis and Nikki Sixx. His research led him to seek out a good co-author, and he ended up working with David Ritz.

He adds: “When I started doing the book, I really wanted to get a vibe for how people wrote autobiographies, and I was also looking for a co-writer. I knew I couldn’t make it into the quality book that I wanted unless I had a good co-writer.

“I read Anthony’s book and a lot of the others, but it seemed like Keith’s book really stood out. I think that had a lot to do with his co-writer, turning it into a piece of literature.”