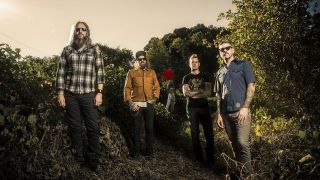 In a year dominated by truly groundbreaking releases from a crop of visionary new bands, Atlanta veterans Mastodon once again outpaced all challengers to win an unprecedented fourth Critics’ Poll for their seventh studio campaign, Emperor Of Sand. Released in March, the album delivered everything fans have come to expect from the band: chest- pounding riffage, swirling polyrhythms and ginormous, skyscraping choruses that demand to be feasted upon at neighbour-bothering volumes. But it would be Emperor…’s evocative lyricism and fearless emotional vulnerability that would reach across genres, finding a thunderous reception both within and beyond the metal community.

The run-up to recording saw Mastodon beset with an insidious onslaught of life-and-death crises. Bassist/vocalist Troy Sanders’ wife Jeza was diagnosed with breast cancer, and guitarist Bill Kelliher’s mother lost a nine-month battle with brain cancer. Meanwhile, drummer Brann Dailor’s own mother continued her ongoing battle with chronic illness. Turning inward to support each other, the four men channelled these pulverising emotional battles into the monumental 11-track concept album that would become their most personal outing yet.

Emperor Of Sand recounts the story of a man sentenced to death by a vengeful Egyptian ruler, but the band made no secret that the tale was an allegory for cancer, with the disease embodied by the titular antagonist. The band’s willingness to confront their struggles so publicly resonated powerfully throughout the metal community.

“Fans have come out of the woodwork with their own cancer survival stories,” Brann tells us. “None of us are strangers to music being that thing that helps you through some of the hardest times in your life. I’ve dealt with some tragic moments and music’s always been the thing to help me get through it.”

On the strength of tracks such as Show Yourself, Precious Stones and Steambreather, the record stormed onto the charts, debuting at Number 7 on the Billboard 200 and 11 in the UK. Critics couldn’t find enough superlatives to praise Emperor…’s scale and depth, and the accolades soon followed. Brann reveals a genuine sense of surprise and humility to have again won Metal Hammer’s Critics’ Poll.

“It’s amazing whenever anybody wants to give us an award!” he says. “We definitely hold Metal Hammer in high regard as a publication and as a barometer that sort of points people in the right direction as far as our scene is concerned. I love all of the people over at Metal Hammer. They’ve always given us a wealth of support and love, and they’ve just always been really great to us.”

Looking forward, Brann radiates a real enthusiasm that something electric is happening in our scene right now.

“There’s some stuff going on, you know what I mean?” he says. “I think that things have gotten a little more extreme but also a little more avant-garde, with Myrkur and Code Orange and a number of others. There’ll always be a bed of experimental heavy music happening, whether you know about it or not, but I think more of it is rising to the surface, which I think is pretty exciting.”

Considering this watershed year for metal, we couldn’t have said it better ourselves.

You can read the Top 100 Albums Of 2017 in the latest issue of Metal Hammer – on sale now. Buy itdirectly here or become a TeamRock+ member to read it right now.