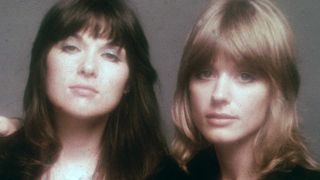 "Heart is a group I don’t normally talk about, but they were a cornerstone in the way I approach songwriting, both vocally and on guitar. I talk a lot about the ‘dude’ bands – I’m heavily influenced by Alice Cooper and Ronnie James Dio and those eighties cats – but Heart were the first female-fronted band I heard and was influenced by. I was listening to a lot of my dad’s music, and I could sound like those bands even though I was a girl. And then I heard Heart and was like: ‘Oh, singing like that as a girl is actually a thing!’

“Back in 1995, Heart put out The Road Home, a live record, and that was the first album I heard by them. My mom ended up getting it for me. They had this amazing version of Crazy On You which was semi a cappella with a little bit of background music. It blew my mind. I couldn’t believe a voice could do that and she was a chick. Amazing!

“From there I dug back through the old studio records. I love them all. I have to say, though, when I heard the album version of Crazy On You and some of those songs, it didn’t do as much for me as the live versions on The Road Home.

“I saw them live last year and they’re amazing. Someone during the show announced that everyone on stage was doing every song in the actual keys they were written in and they weren’t using any tracks. Those guys are in their sixties doing that – it’s amazing they can sing those songs live. So I have to work on what I’m doing. It’s a rite of passage, like, ‘Okay, you can write these songs, but can you play them live?’ They set the tone for what I do.

“They have put out records regardless of what was the flavour of the week. I had a conversation with Pat Benatar, and she told me there’s this gap that you have to go through as an artist: you’re very popular and everyone is excited for you, and then there’s a period where nobody cares, even though you’re still putting out records. If you make it past that period, then that’s the iconic shit. That’s when you break through to the other side. Pat Benatar told me she would personally slap me if we gave up when we’re in that period. But Heart had to go through that time, and they pushed through.

“We covered [on Halestorm’s 2011 EP Reanimate] All I Wanna Do Is Make Love To You very carefully, because you don’t want to ruin a Heart song. It’s a very underrated track. I did it like that first version I heard on The Road Home.

“I met them with the Alice In Chains guys. William [DuVall] and Jerry [Cantrell] took me to a Heart show and we went backstage. I got to talk to Nancy, who has a hell of a grip from playing guitar. I was like, ‘Whoa!’ Then I met Ann. It was incredible to be in their presence and to see how humble and normal they are.”

Halestorm's Vicious is out now.