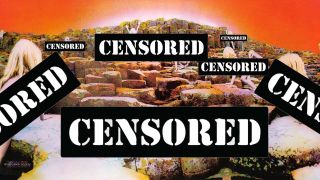 On February 24 2011, Michelle Kaotic uploaded the cover of Led Zeppelin's Houses Of The Holy sleeve to an event page marking the anniversary of the album's release.

You know the artwork. It shows two naked children clambering over the Giant's Causeway, a natural jigsaw made from thousands of interlocking basalt columns located on the north coast of Northern Ireland.

Shot by famed Hipgnosis designer Aubrey Powell, it's a piece of art that reflects the late 60s/early 70s fascination with natural childhood innocence (see also: the cover of Blind Faith's debut album, and psychedelia's obsession with Alice In Wonderland). It's an album that sits in millions of homes worldwide, and there's no doubting the image's iconic status.

Facebook took a different view, and issued Kaotic with a notice claiming that the album cover had fallen foul of the company's community standards on nudity or sexual activity. "At first I was shocked, thinking this was a one-off thing," says Kaotic, who runs the Facebook page Led Zeppelin ~ Ultimate Fan Page.

But then other people began to report similar stories. Kaotic had already heard from a friend who ran a Jimmy Page fanpage who was locked out of her account for three days after posting the image, and now the other reports began to tumble in. So much so so that a petition was set up, asking Facebook to stop censoring the image.

Ironically, when Kaotic shared the petition on Facebook, she ran into trouble again.

"Approximately 30 minutes after posting the petition on my page, I received a notice that the post went against community standards," she says. "I then created another post, mentioning how the petition was removed. Before too long, everyone was commenting, indicating that they had shared the petition and been given warnings.

"The link to the petition was being removed by anyone sharing it. All because the thumbnail image was the album cover. I even had page members message me to indicate that they had been given 24 hour bans. Some even received three days."

It can get worse. In 2012, Jadwiga Petrykiewicz set up a Facebook page, Zeptember, to pay tribute to Led Zeppelin. The page no longer exists.

"In late 2016 and early 2017, I started to receive notices from Facebook that posts relevant to the Houses Of the Holy album were 'against community standards'," says Petrykiewicz. "I tried – multiple times – to respond to their notices, but all the replies were automated. This led to a point where I was blocked from posting, sharing or commenting, and then my Zeptember page was deleted. I tried to resolve the issue with Facebook, but had no reply."

So what's going on? Why have Facebook apparently banned images of an album that's sold over 10 million copies in the US alone? Facebook's own Community Standards Policy Rationale states that they allow the upload of "photographs of paintings, sculptures, and other art that depicts nude figures," so surely the Houses Of The Holy artwork is explicitly permitted?

In 2013, Facebook revealed that its users were uploading 350 million photos to the platform every single day. This, as you can imagine, presents an enormous problem with regards to moderation.

So Facebook have algorithms that kick in if the people featuring in an uploaded image are deduced to to be baring above a certain percentage of skin. And you’d expect Houses Of The Holy to trigger that. Otherwise, images can be reported by users, although Facebook claims that 96 percent of posts featuring nudity are removed before they're made public.

What happens next is the interesting bit. Flagged images are shown to moderators, who have a couple of seconds to approve or ban an image before moving on to the next. Yes or No. It's a grim job. The moderators witness murders, and child rape, and all kinds of other graphic violence.

The moderator could work at a moderation centre in Phoenix, Arizona, or at an outpost in The Philippines, or at any number of discreet offices around the world. Most likely they've never heard of Led Zeppelin. They just see an image. Yes or No. And once a human has deemed that an image contains suspect material, it's likely to be automatically removed in future.

You could argue that we should relax, accept that some censorship is necessary, and live with the occasional false positive. After all, the ban isn't because Facebook necessarily think sharing House Of The Holy on your timeline is going to be a magnet for paedophiles. It's merely a reflection of the near-impossible scale of the task.

But there's hope. We've been here before. Back in 2011, the artwork for Nirvana's Nevermind was banned by Facebook. Then it was unbanned.

It's confusing, and Facebook's vast size and lack of transparency mans that we can only guess at what's going on. Are these album sleeves not triggering the nudity algorithm? Has no one reported them? Or has an actual human being taken a look and added them to some sort of whitelist?

Either way, the end result is confusion. "If Facebook wants to enforce rules then they should do it for all those who fail their community standards protocols, not just one particular album," says Kaotic.

Houses Of The Holy's ubiquity has afforded it a degree of protection in the past. While Blind Faith's debut and The Scorpions' Virgin Killers - both far more controversial portrayals of innocence, admittedly – have been repackaged, Zeppelin's fifth album hasn't, even though it's unlikely a major record company would countenance the artwork today, when everything is viewed with eyes far more attuned to paedophilia than was ever the case in the early 1970s.

"As a mother and grandmother, I am certainly against child pornography," says Jadwiga Petrykiewicz. "But when it comes it to Led Zeppelin's Houses Of The Holy album cover, individuals need to realise that people living in that era thought differently to the way society thinks today.

"I'm not just saying this as a Led Zeppelin fan, but I truly believe that the album artwork is part of the band's history, and really ought to be preserved."

Update: After this piece was published, Michelle Kaotic shared a link to another website's story of our reporting, a piece headed by the "offending" image. She was subsequently handed a three day posting ban by Facebook.

Update 2: Two days after this story was published, Facebook reversed the ban on the Houses Of The Holy artwork.