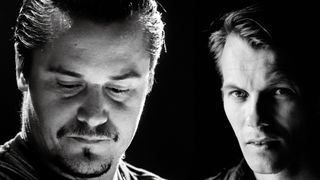 If there’s one thing that unites fans of progressive music, it’s a never-ending thirst for the new. Not every artist can pursue a fully liberated creative path, of course, and there is plenty to be said for great songwriting and supreme musicianship, but music’s evolution depends greatly on people like Mike Patton. Since his early days as frontman with perverse art metal maniacs Mr. Bungle and, most famously, arena-bothering oddballs Faith No More, the Californian has spent the majority of his artistic life exploring the outer limits of sound, collaborating with a dizzying number of celebrated mavericks and obscure weirdos and releasing a steady stream of mind-bending records via his own much-admired Ipecac imprint. In truth, the joy of being a fan of Mike Patton is that one never has the faintest clue what’s going to come next.

Prog speaks to Patton today to herald the release of his second collaborative album with Norwegian film composer and freewheeling classical pianist John Kaada. Twelve years on from their first joint effort, the wonderfully bizarre Romances, this seemingly unlikely pairing has once again conjured a collection of songs that casually straddle the daunting chasms between classical, jazz, film noir ambience and the sonic avant-garde. Simultaneously accessible and distinctly unsettling, Bacteria Cult is the sound of Norway and California colliding in soft focus and slow motion, as two old pals dive enthusiastically into a peculiar world of their own making.

“We originally met somewhere on the road, in Scandinavia I think, and he was playing with his band Cloroform, which I really loved,” says Patton. “That was the entry point into his world, for me. Then he started sending me some stuff that he was working on. I just thought, ‘Wow, this is amazing!’ So I asked him to do a record for Ipecac, and it just grew from there. At that point it wasn’t about collaborating, it was more, ‘Wow, this guy is doing really great stuff and I’d like to help out in any way I can…’”

“I think Mike felt something refreshing and inspiring about what I was doing,” adds Kaada. “I was surprised that he jumped right in, but he did. I’ve learned a lot from him and I also learned that it’s all in the details! He didn’t let go. He was really, really, totally into the process and I thought it would go on forever because he was working on the songs for many, many months. Finally it was released and that was it. The next stage was then at Roskilde festival in 2005 [as documented on 2007’s Kaada/Patton Live album] when we played together for one show. Seven, eight years later, I sent him some songs again and here we are today.”

Patton’s chameleon tendencies over the past two decades have seen him join forces with everyone from left-field jazz titan John Zorn and Japanese noise guru Merzbow through to hip-hop DJ unit The X-Ecutioners and Australian composer Anthony Pateras. What seems to set Bacteria Cult apart from many of the vocal polymath’s more esoteric projects is that beauty consistently triumphs over ugliness, despite the macabre mental images evoked by songtitles like Peste Bubonica and A Burnt Out Case. Patton puts the album’s lush and meticulously crafted sound down to the skills of his musical co-pilot.

“John is well-versed in classical and jazz stylings and instrumentation. He’s got great ears,” he states. “When I heard his music I could hear that, in the way it’s arranged, in the choices of instrumentation. It’s something I just gravitated towards and felt a kinship with. He just gets it, he knows what goes where. That was super attractive. After we met, it was obvious that he knows his shit. That really impressed me so I put a little check mark next to his name in my Rolodex!”

“I feel the same about Mike,” Kaada notes. “On the album he doesn’t just sing. He plays a lot of instruments. He’s very musical. It’s been a big, big learning journey for me. One of the things I learned early on is that it’s no coincidence that he’s so established and admired as he is. He’s a guy that really works hard. It’s not like he has ten assistants helping him out. He’s really, really into quality, tweaking everything that can be tweaked to get it as good as possible.”

I can’t explain where any of this shit comes from. I was born this way. I think it’s just something i have inside…

Both men frequently refer to the “universe” within which the new Kaada/Patton album’s songs shimmer, soar and pulsate. With no lyrics to elucidate themes that focus on what Patton explains as “remote societies, colonization and disease”, it’s a record that makes its point via the deft use of melody amid arrangements that surge and contract, underpinned by the swell of a full orchestra, which Kaada managed to record during downtime in sessions for his soundtrack to 2014 movie La Liste Des Mes Envies. Pinning down the shape, shade and dimensions of the Kaada/Patton universe is a tricky business, a fact not helped by its creators’ disinterest in defining it
for themselves.

“I can’t explain where any of this shit comes from,” Patton laughs. “I was born this way. I think it’s just something that I have inside. If I’ve learned anything over the last 30 years it’s that if you have that drive, then follow it. Once you find a path, man, everything lights up and you see it through to the end.”

“Bacteria Cult raises so many questions and we’re happy for them to remain unanswered and let people’s imaginations run wild!” Kaada concurs. “That’s what makes it magical. It’s good to leave things unsaid. There’s something satisfying about that. It’s easy to destroy things by explaining them.”

Having spent a large portion of the last two years on the road with a reunited Faith No More, Mike Patton could be forgiven for resisting the urge to follow up Bacteria Cult with live performances, not least due to the logistical demands involved in bringing such a musically rich and lavish record to life. But if anything has defined his career, it’s a relentless pursuit of powerful musical experiences and the incredible magic that can erupt when kindred spirits pool their gifts. As a result, it comes as no surprise that plans are afoot for Kaada/Patton to return to the stage in 2016, even if the details have yet to be nailed down.

“In order to realise it properly, we’re gonna have to do it with an orchestra, but we have to look at it realistically,” Patton admits. “It’s gonna be tough. The way that I’ve done it in the past, with my solo project Mondo Cane,
it’s tricky! Number one is, ‘Will a promoter pay for all this shit?’ [laughs] Then it’s a matter of finding the orchestra and, then, do we have time to rehearse with them? You can’t just show up and read off the paper. Most pro classical players, it’s a job. I hate to throw ’em under the bus, but a lot of them just read what’s on the paper, cash the cheque and go home. So you really have to find players that are invested, get the music and have the time to rehearse it. There are magical things that are not on the paper that can only be achieved by having a personal connection. Those are the challenges we face. We’re looking at a few concerts in Europe and I certainly hope, and think, that we can do some.”

While they begin to make big plans for the future, both Mike Patton and John Kaada will be beavering away on numerous other projects: two lifelong music obsessives cramming as much creativity into their busy lives as they possibly can. And, as ever, the pleasure in watching the next step in each man’s career unfold will come from the knowledge that, whatever it is, it probably won’t sound like anything else you’ve ever heard. For Patton in particular, the joy of completing Bacteria Cult will soon be overshadowed by the joy of discovering what comes next and, perhaps most importantly, how many willing, open minds can be blown along the way.

“Music is such a subjective thing and it means different things to different people,” he concludes. “Hey, if you want to listen to music in your car on the way to work, I get it. It’s totally okay. There’s no right or wrong way of doing it. It’s just that I don’t do that! [laughs] I think there’s plenty of other people in the world that make music than can be consumed in that way, and that’s great! But why me? I don’t need to do that. John Kaada doesn’t need to do that. There’s a place for us in this world… somewhere.”

Bacteria Cult is out now via Ipecac. See Bandcamp for more details.