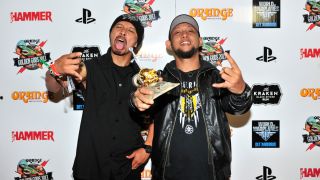 If your ears picked up the faint sound of a grown man shrieking this morning, it was probably me. Indonesia’s biggest and best metal band, the mighty Burgerkill, have been announced as the latest addition to this summer’s Bloodstock bill and I am beside myself with excitement. Observant metalheads may already know that Metal Hammer has been championing this band for a while now, but this announcement means a lot more than just another cool band to watch during festival season. For Burgerkill themselves, the opportunity to perform in the UK is an absolutely huge career development, not to mention some well-deserved payback for two decades of hard slog, fierce determination and an unerring and laudable devotion to the heavy metal cause.

Long before Hammer awarded Burgerkill our coveted Metal As Fuck award at the Golden Gods ceremony in 2013, the band were slaving remorselessly away in an admirable attempt to forge relationships with a wider world. Indonesia’s metal scene is a beautiful thing – diverse, united and rabidly enthusiastic – but even in the internet era, the simple act of connecting with audiences beyond southeast Asia provided a formidable challenge that would be unimaginable for bands in the privileged and pampered West.

Fortunately, Burgerkill have the music, the stage presence and the commitment to back up their ambitions. Check out their most recent album Venomous for a glimpse of what this band are capable of… and if you need further convincing, I’m happy to state that Burgerkill are one of the very best metal bands I’ve seen in action over the last decade. With elements taken from thrash, groove metal, metalcore and other, more extreme metallic strains, they have a distinctive sound that transcends geography and suggests that, with a bit of luck and help from their friends overseas, Burgerkill are more than equipped to make the international breakthrough that their dogged efforts have long deserved. If you’re planning to attend Bloodstock this summer, do not miss their (first) moment of European glory. Metal is a global language and Burgerkill are fluent speakers with a bright future ahead of them. Anjing edan!*

(*This means ‘fuck yeah!’ in Sundanese)

You can get tickets to this year’s Bloodstock here.