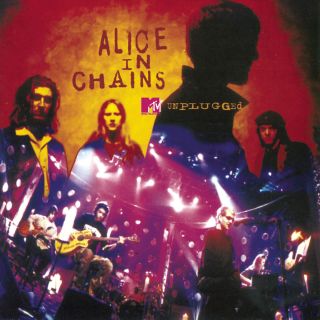 On April 10, 1996, pioneering Seattle grunge metallers Alice In Chains re-emerged after a two and a half year long live show hiatus (the band didn't tour in support of 1995's Alice In Chains) to play the legendary acoustic television series MTV Unplugged.

The stage lit with giant white candles purchased from Seattle's Pike Place market by vocalist Layne Staley (no way that would pass health and safety nowadays), the concert would go down in pop culture history as one of the most significant MTV Unplugged sessions ever recorded.

But, even without the visuals, the CD version of the show – released on July 30, 1996 – is an iconic and essential record that every self-respecting AIC fan should own and it's more than earned its place as one of the most important and exceptional live albums ever made and the number one MTV Unplugged album to come out of the series (Nirvana's MTV Unplugged comes in a close second).

You might be screaming at the screen shouting "No way! You're crazy! The greatest live album ever? But that's Motorhead's No Sleep 'Til Hammersmith or Iron Maiden's Live After Death!" You might have a point but I am here to tell you no, you're wrong my friend.

No stadium show can ever be captured accurately on a CD, indeed I'd argue that no CD would ever really match the atmosphere of an epic live performance. But, the intimate setting in which this album was recorded and the following reasons I've laid out prove Unplugged has an unparalleled added depth that makes it a goddamn masterpiece with the ability to tug at your heart strings even in the most condensed MP3 format or when played through the cheapest stereo system. That's just how magical it is...

One of Layne Staley's final performances

Alice in Chains Unplugged marked the second to last performance from Staley, who was battling a crippling addiction to heroin that was poignantly chronicled through the band's dark and agonising lyrics.

His final ever performance was in the same year, when Alice in Chains replaced Stone Temple Pilots in an opening slot for the newly reunited Kiss. Staley overdosed following their concert in Kansas City on July 3 and despite the frontman recovering from the incident AIC were put on hiatus, and other than one brief recording two years later, where the band briefly reunited to record the songs Get Born Again and Died for Music Bank, Alice in Chains never played with Staley again.

The original performance is therefore a chilling look at the tragic downfall of one of rock's most charismatic and enigmatic frontmen from glam rock loving metal star to the epitome of grunge – in the most negative sense of the word: a bedraggled junkie with scruffy pink hair awkwardly shuffles from the back of the stage and takes his seat.

Sunglasses disguise his blackened eyes, long sleeves cover scars left behind from shooting up and he awkwardly clutches his hands together as if afraid to emerge from the shadows and take centre stage – quite different from the powerful vocalist we'd come to know and love.

His once glowing, cheeky grin is replaced by a morose, pained half-smile, but nevertheless, his sense of humour is still prevalent and he immediately belts out Nutshell and continues to give a strong vocal performance throughout – a testament to his sheer natural talent.

The album understandably garnered a resurgence of recognition after the death of Staley, with many media outlets – even those who had given the album initially scathing reviews – praising the power of performance despite his condition at the time.

"I wish I could just hug you all, but I'm not gonna," Staley proclaims at the end of the record – and we wish we could hug you right back, Layne.

Acoustic Alice in Chains is nothing short of haunting

It's not just the tragic backstory that makes Alice In Chains Unplugged a poignant piece of work, the tracks themselves are what make it a truly formidable live record.

If you were to know nothing about the band prior to listening, odds are you'd still come away moved.

AIC's down-tuned sludgy heavy metal somehow lends itself to the acoustic format. Every song transforms from a powerful, angry and forceful catharsis to a frustrated and haunting lament.

Opening with Nutshell – taken from Alice In Chains' third studio EP Jar Of Flies – the track has become a staple of 90s grunge, despite never being released as a single. If a band can start a show, an MTV live show aired on international television, with an album track you know they're something special.

Staley immediately starts singing it as he takes a seat, without any perceived warning but somehow seamlessly matching with guitarist Jerry Cantrell's strumming.

While we were all aware of Staley's battle against addiction (there were many rumours circulating about his decline in health, which only became worse after the band's hiatus) and while AIC's lyrics had never shied way from the bleak reality of his relationship with drugs they become all the more stark and impactful when crooned alongside the strums of an acoustic guitar. Every word resonates and Staley and Cantrell's raw, signature harmonies with no accompaniment will chill you to the core.

The lyrics "We face the path of time/And yet I fight/And yet I fight/This battle all alone/No one to cry to/No place to call home" are so much more soul-stirring when placed up against the tranquility of the intimate setting and calmer-paced melody, and opening with this hopelessness and despair is all the more heartbreaking.

Alice In Chains prepared the entire show ahead of time, with the specifications of MTV Unplugged in mind, creating a set list that balances more energetic tracks with solemn, tenser songs.

The set was compiled like an album, which is likely why the record itself, when it was released on CD format, became such a big hit with audiences.

Following Nutshell, the band move into Brother and then No Excuses – a song that just lends itself to the acoustic format. Alice in Chains play some of their greatest hits (including Rooster and Would?) and even throw in a brand new, never released song – the finale, Killer Is Me. This choice of closer is particularly eerie in the wake of Layne Staley's death.

It's the little things

The band manage to give Metallica (who for the knowledgable or keen MTV Unplugged viewers know were sitting in the front row of the show) a nod, breaking into the intro of both Battery and Enter Sandman seamlessly in between their own iconic tunes, to which you hear the crowd's delighted response.

But unlike traditional live albums, there aren't constant screams and audience reactions – just a few laughs and comments that immerse you in the atmosphere and to which you can hear Staley's tongue-in-cheek responses – and it really is a treat to feel like you are in the room with the guy.

If you listen closely, you can hear Staley's slight lisp – particularly when he addresses the crowd – a tragic reminder that he was slowly but surely perishing away thanks to his constant heroin and crack use, and it began with the deterioration of his teeth, a few of which he'd reportedly lost by the time of this show.

Despite the dark troubles behind closed doors, the band maintain their humour – the night of the performance, Cantrell had food poisoning, yet you'd never know it and of course Staley powers through his own illness and, as mentioned, adds humorous quips that prove his light is clearly still shining someone underneath his fragile exterior. If you take a look at the DVD version, you can see Jerry encouraging and helping out his old friend as he gets used to the idea of being on stage again (it had been three years after all!).

These small but poignant elements add a tragic and heart wrenching depth to the entire album, none of which would not be noticeable, or wouldn't occur at all, had the record been produced and recorded in a studio.

It debuted at number three on the Billboard 200 chart, and has since been certified platinum by the RIAA, while the VHS video of the performance is also certified gold – if that doesn't prove what a spectacular, incredible piece of work this record is, I don't know what does.

Not only that, but the performance itself has gained a legendary status that nobody  could have imagined at the time – this record is a snippet of heavy metal history. The magic captured through the performance is quite frankly, spectacular:

The jokes and how Staley and Cantrell bounce off of each other in such a light-hearted and humorous way, the sheer musicianship of every member of the band, the thoughtful curation of songs that worked so perfectly in the acoustic setting and, of course, the fact that Alice in Chains hadn't performed together for such a long period before it as well as the tragic reality that they barely would ever again.

This truly is a special record and one every metal fan should treasure. The true beauty of it, and why it's the greatest live album of all time, is that it works just as a stand alone album as it does as a video ( and not just as a memento of a live concert) how many live records can you say that about?

Get your little slice of heavy metal history here.