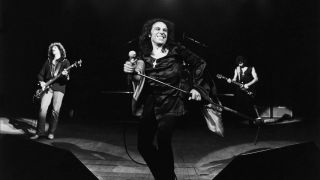 Remarkably, Ronnie James Dio: A Biography Of A Heavy Metal Icon, by American author James Curl, is the first biography of one of rock's most legendary singers and performers.

The book chronicles Ronnie’s life from his beginnings in Cortland, New York, covers his experiences with Elf, Rainbow, Black Sabbath, Dio and Heaven & Hell, and goes on to tell the story of the singer's battle with stomach cancer and tragic early death.

Ronnie James Dio: A Biography Of A Heavy Metal Icon is available now.

In this excerpt, Ozzy Osbourne has left Black Sabbath, and Tony Iommi is looking for a new singer.

It was while attending a party at Don Arden’s house that Ronnie first met Tony Iommi. The two were introduced by Sharon Arden, the daughter of Don Arden, who was managing Sabbath at the time. Although not involved with Ozzy yet, Sharon would eventually go on to marry Ozzy and become the well-known television personality Sharon Osbourne.

“It was at this point that Sharon introduced me to Ronnie,” said Tony. “I approached him and said, ‘I’m in a terrible situation. I don’t think it’s going to work anymore with what we got. Would you be interested in doing something else?’”

Ronnie was definitely interested, but it would take several months before he and Tony would actually get together. Tony, Geezer and Bill were still in a state of confusion as to what was going to happen with Ozzy and didn’t know if he was going to return or not. Finally, after Ozzy made his departure official, Tony said to Bill and Geezer. “Why don’t we try Ronnie?”

A few days later Ronnie got a call from Tony who invited the singer over to his house for a jam session. Pulling up in his big Cadillac, Tony got a laugh when he realised that Ronnie had to have the seat moved all the way forward.

At Tony’s house Ronnie became acquainted with Bill and Geezer. While getting to know the Sabbath members Tony played Ronnie a song he had been working on called Children of the Sea. In no time, Ronnie came up with a vocal melody for it. “Tony had this great riff he played me,” said Ronnie, “but nothing to go with it. I said, ‘Gimme a minute’ and went into the corner and started writing down the words. Then we recorded it. When we played it back it was obvious to both of us, we really had something here.”

Tony, Bill and Geezer were pleased to say the least.

“We were really impressed,” said Tony, “because within a day we’d gone from nothing happening for ages to being able to come up with a song immediately. We played a bit of Lady Evil, and Ronnie immediately sang to that as well. We thought bloody hell, we’re onto a winner here.”

Despite the great progress that Ronnie and his new band mates were making, Geezer decided that he would have to leave the band. For some time now he had been having marital problems and he could no longer avoid dealing with them. So, he headed home.

Until a replacement could be found Ronnie picked up the bass and work on the album continued. A short time later Tony brought in his friend Geoff Nicholls from the band Quartz as a temporary replacement.

The first song that the four worked on together was Heaven and Hell, a song that Tony had been working on previously. Tony played Ronnie the riff and, “Ronnie just sang away to it,” said Tony. “It was that instantaneous. And we said to each other, oh man, do we like this.”

With Ronnie in the band there was a new dynamic and new sense of purpose that reinvigorated his band mates. And it was easy to see that together Ronnie and Tony created a genuinely great writing partnership. Ronnie’s ideas were refreshing and vibrant and helped lift Sabbath out of the rut it had been in for some time. In fact, Tony felt that Sabbath had gotten a little lazy over the past few years and he liked what he was seeing and hearing. Ronnie challenged them and as a result Tony felt that the band was getting progressively tighter and more professional.

Everyone was pleased with the progress on the Heaven And Hell album except Don Arden. Don had made it clear that the band needed to get Ozzy back and that he didn’t like the idea of having Ronnie as the singer. “You can’t have a midget singing for Black Sabbath,” said Don. Ronnie and Tony knew, however, that they were onto something good and had no intention of stopping. So, out of spite, Don had the rented furniture removed from the house that Tony and Bill were staying in.

Realizing that the situation was only going to get worse, Tony decided to cut his relationship with Don and move on. After some talks with Ronnie and Bill it was agreed that it was time for a change. A few weeks later Sabbath left Los Angeles and relocated to Miami, Florida, where they rented a house owned by Bee Gees front-man Barry Gibb. In no time, they had a rehearsal studio set up and work continued. To help out, Ronnie had his old band mate from Rainbow and Elf, Craig Gruber come down and play bass while Geoff became the official keyboard player. But this lineup didn’t last long. Geezer, having sorted out his marital problems, was back in the band a few weeks later to resume his rightful spot as bass player. A few weeks after his return, writing for the album was completed and it was ready to be recorded.

Ronnie James Dio: A Biography Of A Heavy Metal Icon by James Curl is out now.