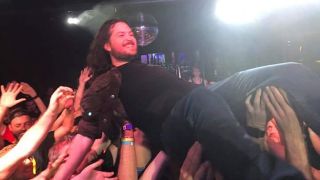 Thousands of Pearl Jam fans were left disappointed last week when the band were forced to cancel their second of two shows at London’s O2 Arena.

Just hours before the band were due to hit the stage, news filtered through that frontman Eddie Vedder had lost his voice and the show would be pushed back to mid-July.

But when one door closes, another one inevitably opens – and tribute band Pearl Jamm saw this as the perfect opportunity to put the smiles back on fans’ faces with a raucous show at the city’s Borderline.

Within a matter of minutes, tickets for the impromptu show had sold out, with a snaking queue of fans putting the disappointment at missing out on seeing the Seattle outfit aside and ready instead to enjoy a substitute performance by the London-based tribute band.

We spoke with Pearl Jamm bassist Richard Gaya about the night and what it was like to take the place of their favourite band for one special night – and how they tried to tempt Pearl Jam drummer Matt Cameron to join them onstage.

How long did it take to organise the show following Pearl Jam’s announcement?

“Following several frantic phone calls, we announced at 3pm that we would be playing somewhere in Central London and by 4pm the Borderline was confirmed and tickets were on sale.

“Even then, a lot of logistics still needed to be sorted including who would play drums! We just needed to run with it and have faith we'd pull it all together in time. Massive thanks to DHP Family and the Borderline who more than played their part in making it happen.

What it was like walking out on stage that night?

"The whole day had been a whirlwind so we hadn't had a moment to stop and think about what we were doing. There had been a long line of people waiting to get in since well before we arrived.

“Doors had been pushed back to allow us a short soundcheck and there was an air of anticipation and expectation. We wanted to get on stage as soon as possible so we could play for as long as we could.

“When the intro music started, the roar from the crowd was overwhelming and we hadn't even picked up our instruments yet! We're lucky to get great audiences wherever we go, but the Borderline was on another level entirely.

“Normally, with a tribute band there's a bit of arms folded, standing still, making sure we're doing justice to the real thing before they let go. At the Borderline, there was no waiting to get warmed up – they were on fire from the moment our intro tape started.

“There was a look of joy and elation on people's faces and I think that's when it hit us that this really was something special – that they were grateful to us for saving their night. We were so caught up in getting it organised that we hadn't stopped to think what we'd pulled off or what it meant to people.

“But despite that, we knew that, no matter how loud the crowd were when we came on stage, if we didn't put on the show of our lives, we'd be letting them down. Many, including ourselves, had seen the real Pearl Jam only the previous night so we had a lot to live up to.

Was this the best gig you’ve ever played together?

“Without any shadow of a doubt. Everything came together and the circumstances were so unique. We feed off the energy of the crowd so it was relatively easy for us to put on our best ever performance.

“That's not to say we haven't played other great shows but this was just insane! People all around the world have been talking about it and those circumstances could never be reproduced. It was a one-off and those that were there will always remember how special it was, for band and audience alike.

“Personally, I had tried to buy tickets for Pearl Jam's own legendary show at the Borderline in 1992 and was unable to so it was incredible to have a similar scramble for tickets for our own show 26 years later! In fact, thanks to internet ticketing, we probably sold the venue out quicker than they did!

I understand you approached Matt Cameron to join you on the night but he declined. Can you tell me how that came about and what he said?

"On the day of the gig I looked like a stockbroker with two phones to my ear, and Whatsapp and Facebook messages pinging literally faster than I could read them! There was one message that said, ‘call this guy’ and had a number.

“I didn't have a clue who he was but couldn't waste time finding out. I phoned up asking for him and said, ‘I have no idea who he is and he has no idea who I am but I know we need to speak urgently!’ It turned out to be the guy who booked Pearl Jam for the O2 gigs.

“He kindly relayed the message to the band and the response we got was, ‘Matt has declined to perform.’ There was no time to find out any more and it didn't matter anyway. We didn't even know whether he was still in London.

“It meant a huge amount to us that Matt – and, we assume, the rest of Pearl Jam – even knew about the gig and we had our fingers crossed that one or more of them might turn up – but they didn't!

“It was far from unrealistic, even if it had been unlikely.”

Pearl Jamm have several shows lined up over the coming months. For the latest dates and ticket links, visit their website or Facebook page.