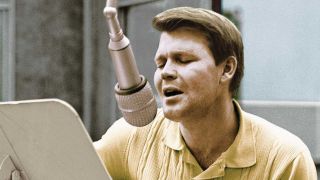 Glen Campbell: Sings For The King

Between 1964 to 1968, when he wasn't busy recording sessions with famed LA group The Wrecking Crew or recording solo albums, Glen Campbell had a sideline: recording songs for Elvis Presley.

Campbell was originally hired by songwriter Ben Weisman, a man whose songs Presley recorded more frequently than any other. Impressed by Campbell's perfect pitch and ability to mimic Presley's  style, he was asked to record songs that would then be presented to Elvis for his consideration.

Now 18 of these songs – discovered by Executive Producer Stephen Auerbach on long-forgotten reel-to-reel tapes in a storage space – have been released for the first time.

In the video below, songwriter and producer Jerry Fuller, who played alongside Campbell in a late version of The Champs (famed for their 1958 hit Tequila) talks about introducing Campbell to the music scene in Los Angeles, and reveals what happened when they met Elvis and played football with him and Ricky Nelson.

"It was supposed to be flag football," say Fuller. "But it got kinda rough. People ended up with black eyes."

Glen Campbell Sings For The King is out now.