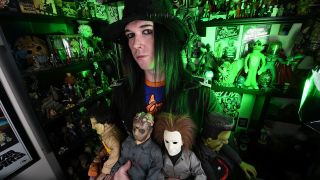 Halloween is creeping up on us, but the weird and wonderful Wednesday 13 has been prepared from a very early age. From dressing up as Rambo to mishaps with an ouija board, October brings back a whole host of mischievous memories for the scariest man in metal. Thanks to our very own Addams Family member and unintentional Halloween salesman, the UK is now a hive of All Hallows (paranormal) activity. We had a natter with Wednesday 13 about his Halloweens past and present to ask the most important question – how long would he last in a horror movie?

So Wednesday, can you remember the first year that Halloween meant something to you?

“I remember Halloween when I was five years old and this TV station showed three black and white movies in 3D on Saturday night, so you’d go to the local gas station to get the 3D glasses if you bought this 30 cent slushy drink. That year, I got the glasses to watch Creature From The Black Lagoon in 3D and I remember my family sitting in front of the TV watching it. I was so little, the glasses wouldn’t fit on my head and my dad had to fit a rubber band around my head. I remember going to the store to get the glasses and they had all these Halloween decorations and pumpkins everywhere, I’d never seen anything like it before. They even had a mannequin hanging from a noose from the gas station sign and I thought that was the coolest thing, I was mesmerised.”

Luckily Halloween’s almost that big in the UK now…

“It works out for me because I’ve been spreading Halloween over in Europe for years. When I first came to the UK back in 2002, it wasn’t anything like it is now. I couldn’t even find a plastic pumpkin to save my life but now it’s everywhere. I hope I brought the Halloween cheer over there. Plus horror’s mainstream now with the Friday 13th video games and the It remake – guys, I’ve been telling you about this for years!”

Did you dress up as a kid?

“I dressed up a lot when I was younger, but of course I had that phase as a teenager when I wanted to go out and throw eggs at cars. I went from dressing as a vampire as a kid to Rambo for three years because I really wanted to be him. Next, I wanted to be Freddy Krueger, then I was a Star Wars character, then I was the teenager that wanted to throw eggs. After that, I became me and I’ve been me for Halloween ever since – I pretty much turned into my own Halloween character that I can’t escape so I’ve dressed up as myself for years.”

We really can’t imagine you as Rambo…

“Picture this little skinny blonde kid running around screaming like Rambo wearing cargo pants. It’s my most ridiculous costume because I definitely didn’t look like Rambo, I was a tiny kid with a plastic gun and knife just screaming everywhere. I didn’t care though, I was in my own imagination and I didn’t care if anybody else was there with me or not. I even wrote one of my classic songs Rambo about him, I’ve been playing it for years but it’s probably the dumbest song ever written.”

Has Halloween lost its sparkle to you these days?

“I don’t think so, for me Halloween’s a different animal now because I play a show on Halloween every year. I become Santa Claus on Halloween, everyone expects a big deal so I don’t have time to think about going out trick or treating. I did have fun back when my daughter was young and I got to do the trick or treating again with her, but now I don’t mind just being me on Halloween – that’s more fun. She’s still very much into Halloween but she’s just older now, you can’t really be my kid if you don’t have Halloween in your blood.”

Have you ever used an ouija board?

“We used to have an ouija board on the centre of our dinner table when my daughter was in second grade. One day she came in and handed me the phone saying, ‘Dad, my friend’s dad wants to talk to you.’ This guy’s on the phone saying, ‘Hey buddy, my son goes to school with your daughter. He says your daughter was playing with an ouija board over the phone and told my son he was going to die tonight.’ I looked over at her and she shrugged so I had to tell this guy I didn’t know what he meant, she must’ve been watching a movie or one of those Goosebumps shows, I laughed it off and I hung up. I went over to her asking, ‘What did you do?!’ She just said, ’I didn’t tell him he was going to die tonight, I said he was going to die later!’ We live in a really small town so we already look like the weirdo Addams family, the neighbours are terrified of us because our grass won’t grow, but I knew if her teachers found out we’ve got an ouija board in our house, there’d be trouble.”

What’s your favourite Halloween movie of all time?

“My favourite horror movie is The Texas Chainsaw Massacre, but when I think of Halloween and October, I hate to be a cheesy hipster but I love the first Halloween film. That movie terrified me because Michael Myers wasn’t this giant pro-wrestler, he was this little 5ft 8 dude but he was scary. In parts four and five, he became this giant 8ft tall monster, but he used to be terrifying because you didn’t know anything about him. He wasn’t even called Michael Myers originally, he was just called The Shape.”

How long do you think you would survive in a horror movie?

“If I was in Texas Chainsaw Massacre, I’d love to be the dude that gets hit in the head in the first part when the door opens. He screams like such a little bitch, it’s hilarious. If I was to be killed, I wanna be the first kill!”

You love collecting horror movie action figures – but if you were an action figure, what accessories would you have?

“I’d use all my quirky stage props like my classic ‘fuck’ umbrella I use on stage when we play I Love To Say Fuck, so I’d be the action figure that brings the violence with a pop-up umbrella that has a blade inside to stab people. I could have my hat with a built-in saw so I can throw it and cut people, perhaps even a cane that shoots out arrows. I like to feel like I’m James Bond on stage with all my tools – I get all these crazy prop ideas from comic book villains, GI Joe and James Bond shit.”

Get your tickets here.

The 10 best old-school horror movies, as chosen by Exhumed