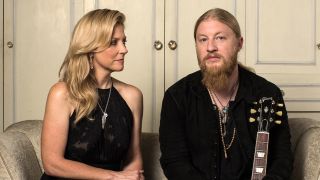 “Things that are real, they tend to last,” says Derek Trucks.

“My dad would take me to see BB King, long before I was playing guitar, and he’d get chill-bumps on his arm and be like: ‘Look at this!’ That was how he would gauge a show. So from a very early age, that’s what was important. When you listened to music, you had to feel it.

“I remember, early on, hearing a few things and getting that feeling. The first music I really enjoyed was At Fillmore East and the Layla record, but also The Best Of Elmore James. There’s just a brutal honesty to it. Mainstream taste is never good. You’re pandering to an audience and in a lot of ways you’re dumbing it down.

"If everybody likes something, you’re probably not trying very hard. But there’s something about speaking the truth and playing with humanity. Blues crowds might dwindle, then get bigger, it comes and goes, but it’s always there. And those records are still great.”

Susan Tedeschi: “When I was little, my dad would play me Lightnin’ Hopkins and Mississippi John Hurt, a lot of that country folk-blues kinda vibe. And I liked it, but it wasn’t my main thing. But then when I graduated college, I had some friends running a blues jam and they asked me to come sing.

“And they also got me playing electric guitar: I didn’t really play anything other than acoustic until I started getting into the blues. It was an exciting time. That music was soulful and inspiring, and I was really angry that growing up, we didn’t have that kind of music on the radio.

"But I’ve realised since that what we’re spoon-fed on radio is kinda all the baloney, the weakest of the lot. So you have to search out the really great stuff, the really soulful stuff. People can relate to the blues. It moves them. It can help to heal you. I think the blues can be very beneficial on a medicinal level.”

Derek: “This was always playing in my house and at the time, it was mythology to me, y’know, to hear these stories of my dad going AWOL from military school to go to the Fillmore shows. And it seemed like so far in the past. Y’know, Duane and Berry had already passed, the band weren’t playing or touring then, so it just seemed like this thing that existed a long time ago.

"To me, listening to that music growing up was like listening to the old blues stuff. It was something that happened back when music was good [compared to] all the shit that was going on at the time, in the late 80s. That stuff was the inspiration, y’know, the sound of Duane’s slide guitar.”

Susan: “Of course, there’s all the albums that people say all the time, like BB King’s Live In Cook County Jail. But Chicago Bound does it for me. There’s a lot of stuff going on there: it’s not as easy as it sounds.

"The songs are just really authentic blues with great storytelling, and it has, like, all of the Chicago guys on it. You’ve got Robert Lockwood Jr, Little Walter, Willie Dixon, people like Buddy Guy coming in and out. It’s just an amazing record and it really captures a moment in time. It’s really got that Chicago flavour. Just real inspiring.”

Derek: “I remember when I was riding around in a van at 14 years old with my first little portable CD player and Bobby Bland’s Dreamer was a record I listened to from top to bottom, over and over again. I think that record made me appreciate that you could actually make great-sounding blues records.

"Because I love the field recordings as much as anyone else, but there’s something nice about hearing Bobby’s voice recorded right. I still don’t know if anybody will ever better him. He was one of a kind.”

Susan: “This was huge for me. I never heard Big Mama Thornton until I was in my early twenties and I was like: ‘Oh my God, this woman is incredible.’ Here she is, singing tunes for Leiber and Stoller, during a time when it had to be really tough for her – y’know, a larger black woman, doing her own thing, playing drums and harmonica and just tearing it up.

"Her singing was on fire. She had so much energy and she could mix up all the genres of the blues. It wasn’t just like everything was a 12-bar and a shuffle. Y’know, she would swing, she would shuffle, she would rumba, whatever.”

Derek: “There’s just something about the feel of that Hard Again record. You can tell the spirit is right. And the sound of Muddy Waters’ voice, recorded aggressively like that, especially on I Want To Be Loved… I remember, for a long time, wanting my guitar to sound like that. That was one of those albums I would just wear out [in the van].

"I just found it recently on vinyl and I put it on again, and I had that same feeling. And y’know, when you see a picture of Muddy, you just want to hang out with that dude. He’s got such a lovable-looking vibe. I’m sure he was much harder than that in real life…”

Susan: “This is a big one that really influenced both of us. It was a big box set that came out, and you couldn’t put it down. You had to listen to every single thing that Elmore James sang and played on it because his tone is amazing.”

Derek: “His thing was ahead of the curve. I remember that Capricorn Records reformed in the 90s, and they bought the rights to all the Elmore material and put out this box set. And after they released it, they started getting calls from people trying to book him. And it was like, ‘Er, you’re 30 years too late!’ [James died in 1963.] But his sound was so immediate and his music still hit people that way, like, ‘Shit, we gotta get this guy to our festival…’”

Susan: “I can’t forget Aretha Franklin. I’ve spent so many nights listening to her, especially Aretha Sings The Blues. Her and Etta James, for me, it’s their tone, and the way they belt. They have the most badass belts of anybody. I love them madly.

"I got to meet her. Our band played this benefit and they had Dave Matthews, Aretha Franklin and Herbie Hancock, and I was like, ‘Are you kidding me? We’re hanging out with Aretha, I’m gonna die!’”

Derek: “We got to sit about four feet from the piano while she was on stage. She sang one tune so well that you could even see her back-up singer crying!”