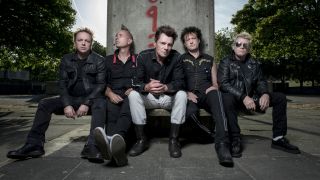 Central conspirators in the late-70s punk uprising – their first gig was supporting The Clash at the Roxy on January 1, 1977 – these criminally underrated West Londoners were a match for any of their more illustrious peers prior to their implosion in 1980.

New album Saturday Night Sunday Morning – their tenth, following a series of reunions – is a master class in melodic pop-punk, their trademark buzz-saw guitars hot-wired to charismatic frontman Gene October’s rock’n’roll rasp on anthems such as Back On The Crazy Train, where he hollers: ‘No turning back/ I’m going all the way.’

It’s been a decade since your last album, Faster, Cheaper And Better Looking. What took you so long?

Faster Cheaper was a good album but it got lost because we put it out independently. Over the past couple of years I’ve bumped into [former Chelsea members] Nic Austin and Mat Sargent and we thought, yeah, let’s do another record. We’re back to that classic, distinctive Chelsea sound.

Songs like Fuck All and They Don’t Care What You Want suggest you’re still as angry as ever.

Are you accusing Gene of having no respect for authority? [laughs]. The same attitude is still there. I’m out and about all the time and you see what’s going on. There are so many alienated people in society who don’t feel part of anything. We’re here to let them know they’re not on their own.

Who else do you think still has that punk spirit?

There’s a few of us left. Charlie [Harper] from UK Subs, Arthur from The Lurkers, mad old Captain Sensible, Colin from GBH. We played a gig together in Manchester to six thousand people the other week. We were all backstage in the same room, winding each other up. It was just like the old days.

Looking back, why do you think Chelsea never got a major deal?

I couldn’t keep my mouth shut [laughs]. I also liked what we had at Step-Forward. It was a genuine independent, we could release whatever we wanted. But if you don’t have someone pushing to get you on the radio, you get left behind.

Do you think Chelsea get the recognition they deserve?

It’s funny. When we bump into American punk bands there’s total respect. They all say: “You guys should have been massive.” Anyway, it must have worked out okay because we’re still here. As long as people are paying to see us, we ain’t gonna stop.

It’s the band’s 40th anniversary next year. Any plans?

There’s a load of things lined up for it. Unfortunately I can’t tell you about them.

I smoke forty a day. Seriously. I’ll tell you why. When I was a teenager I used to hang around the clubs in London and blag my way in. One night I was at this club in Kensington, and Bowie was there. He must have smoked sixty Gitanes. I wanted to be a singer, so I had to ask him: “Isn’t that bad for your voice?” He said: “No, it gives it an edge.” I thought, right, if it’s good enough for Bowie, it’s good enough for me. I’ve been smoking ever since.