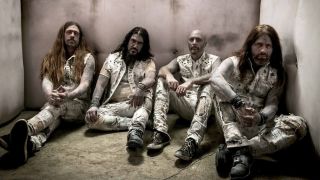 Machine Head’s ninth album Catharsis will soon be upon us, and over the past month or so we’ve been drip-fed songs to whet our appetite. First came Beyond The Pale, then the title track, and now we’ve been gifted the imaginatively-titled Bastards. So what? You’re probably thinking. Well the lyrics have caused a bit of a stir amongst metal fans because Robb uses certain racial and homophobic slurs including the N-word and the F-word (not fuck).

When Robb was in town to promote the record, we asked him about the song, and why he felt the need to include such language.

Robb, you use a number of slurs on the song Bastards. Why?

“That song is a simple folk song to me, it’s four chords that have been played a million times over for the last hundred years, and it’s still the best way to tell a story. That song is based off a conversation my wife and I had with my two boys, the day after the election in America. It was a really intense conversation, it was a really difficult conversation. I was really affected by it and I ended up writing this poem the next day. When I was done writing, I just picked up a guitar and I started playing those chords and singing the chorus, I went and recorded a YouTube clip of an acoustic version, and at that time I thought that was it.

“There was no plan to put it on the record. Machine Head has always had empowering songs, but that whole idea of stand your ground, don’t let the bastards grind you down, kept on popping up in all these other songs – Catharsis, Hope Begets Hope, Eulogy – and it became this tie in the record. Even though the band hadn’t played a band version of that song, at that point, it started making me think we should try a band version, and I wanted to tune it to F because it sounds fucking heavy, and in some weird way it became the centre-piece of the album.

Do you think you’re going to get any backlash from using these words?

Do you agree with Robb’s sentiments?

You can read the full story behind Machine Head’s new album, along with an extended review, in Metal Hammer issue 304 and on TeamRock+.

Machine Head: "People just like calling me a dick"