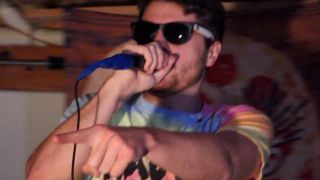 Prolific YouTuber Jarrod Alonge has released a new video satirising the vocalist of every single band on Warped Tour.

This isn’t the first time we’ve seen Jarrod, in fact this is the fifth instalment in his Every Vocalist series which has seen him tackle metalcore, hardcore and pop-punk. Now his snapback is pointed firmly at the touring behemoth Warped Tour and the upbeat, sunshine words they all say from the stage like (as Jarrod himself says): “Where are all my straight-edge youth group bros at?”, “PDA is a Warped Tour tradition” and “Pizza memes”.

He doesn’t forget to “start some beef” either with the guys in As It Is, Memphis May Fire and The Wonder Years. And it turns out “Andy Biersack cuts the line every day in catering”, which in our eyes is the worst thing a band can do.

Why Warped Tour 2015 May Dictate The Future Of Heavy Music