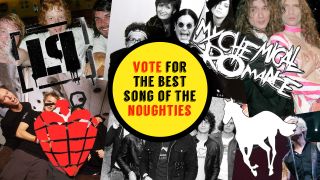 Now we're the best part of a decade removed from them, it's become fashionable to look at the music of the noughties with despair – to bemoan the lack of truly classic albums, the lack of even one band with the stature of a Led Zeppelin, a Beatles, an AC/DC or Sex Pistols.

But even if none of them made a classic album, an amazing A-Z of hot new rockers and returning heroes appeared month after month, year after year, with at least a handful of tracks to renew your faith in rock’n’roll.

Even if record companies weren’t signing them, radio wasn’t playing them and TV was just plain ignoring them, the internet meant that bands could distribute their own records, and showcase tunes via MySpace and YouTube. Suddenly, if you looked hard enough, it seemed that there was an explosion of great new bands and reinvigorated new material from old heroes.

Don't just take our word for it – a quick scan through the decade confirms the quality of music being made. Old-timers like AC/DC, Clutch, Def Leppard Foo Fighters, Guns N' Roses all released albums which at least kept pace with the quality of what they'd been releasing in the decade before.

Meanwhile, newbies such as Biffy Clyro, The Darkness, Kings Of Leon, Sum 41, The Black Keys and many, many more were staking their claim as rock's next generation. Linkin Park, Limp Bizkit et al made a play for the big time as nu metal blew up the charts. All in all, it was a pretty good 10 years.

Among all those killer albums, hundreds of thousands of brilliant new songs were born. While the likes of The Strokes, Green Day and Blink-182 dominated MTV2 with Last Nite, Boulevard Of Broken Dreams and The Rock Show respectively, Bon Jovi and U2 represented a raft of established artists keeping American rock radio alive (It's My Life and Beautiful Day are both undeniable bangers). Elsewhere, singles like Frantic signalled a new lease of life – for better or worse – for Metallica, while future classics – like adopted football anthem Seven Nation Army – emerged from The White Stripes.

Now, we feel like it's time to give rock's most-maligned decade the love it deserves, and we want to hear from you. Which were the songs that defined the decade for you? Let us know in the poll below.

We've left the field completely open so you can choose anything you feel deserves a nod – and included a playlist in case you're in need of inspiration. We'll publish the results soon, so check back in the coming weeks.

Please format your choice like this: Artist name - song title