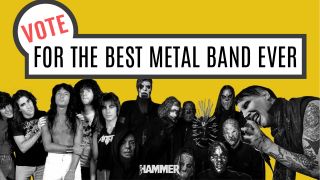 We've all been there: a heated debate over a pub table, a furiously-typed battle on a music forum, rage-quitting the group chat because no one will just bloody well admit you're right. It's a question which has plagued metalheads since the genre began: who is the best metal band of all time?

Well, we're on a mission to find out, and we need your help. We've assembled a long-list of 115 bands we believe worthy challengers to the title, and now it's over to you to vote for your favourite.

Perhaps you're a purist who believes the original is always best – so you'll be voting Black Sabbath. Or, maybe you're a thrash warrior who believe Anthrax were actually the Big Four's most important pillar. Defenders of the faith, you'll find Judas Priest in the long-list below.

While we've tried to ensure that old metal, nu metal and new metal are all amply represented, if we've missed your most-loved band from the list, there's also an option to add your own to the poll below.

Each voter is given five votes, so think hard and make them count. We'll be publishing the results in the coming weeks, so make sure to check back for the final 50, as voted by you.