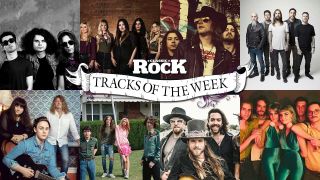 Hey folks, and welcome to another fresh instalment of Classic Rock's Tracks Of The Week, in which we present the creme de la creme of new rock'n'roll. We've got some excellent stuff to tempt you with today, including a healthy crop of new faces, but first up let's look at last week's top three in reverse order:

Congratulations to The Brink on their winning track Are You With Me! And well-played to Neon Animal and Slash for hard-fought second and third places. Now, let's see who emerges victorious in this week's battle of the tunes - listen hard, listen well, then vote for your favourite at the foot of this page...

Chains Of Daisy - Dead As Stone

Sweet, swaying southern fodder from this side of the pond now, chocked with classic rocking solo flourishes. It's the sound of a life being taken at a really frickin' easy, breezy pace, in which the weather's always peachy and the next meal and jam session are one's primary concerns. Sounds pretty good, right?

Dorja are technically London-based, though their members are spread out between Los Angeles, Dublin, London and Bristol. This transatlantic vibe is reflected in this new single (taken from upcoming new album Gemini); a cool, brooding but upbeat mesh of hard rock, grungy tastes and pop sensibilities (singer Aiym Almas sounds a little like Sia crossed with Lzzy Hale).

Pröwess - Lookin' For A Bullet

There’s a definite whiff of Thin Lizzy in this rollicking, bouncing shot of straight-in-yer-face classic rock’n’roll – which we’d class as A Good Thing. Produced by ex Biters main man Tuk Smith (there’s a touch of that band about these guys as well, minus the glam), it’s a roughened but tight, catchy affair that should come with its own line of motorbikes and leather jackets.

Honestly this did not sound good on paper. Our initial reaction went something along the lines of: 'Members of Fall Out Boy, Every Time I Die and Anthrax teaming up in one band? What fresh hell is this??' Our cynicism was proved utterly unfounded, however. As the fiercely catchy Omen shows (part Thin Lizzy, part punk grit, part grunge) this is one supergroup you do need in your life right now. They've obviously made this purely for the love of it, and it's paid off in spadefuls.

More deliciously bluesy, soul-rocking action from Chris Buck and Sally-Ann Evans, taken from forthcoming album Write a Better Day (several years in the making, and spurred on by a crowd-funding campaign). First-class vocals, luscious guitar work... you know what you're getting with this lot, in a really good way.

Starcrawler - She Gets Around

The L.A. whippersnappers seem to be going from strength to strength, if this attitude-laden new single is anything to go by. They started off as sparky but incredibly raw high hopers ("lots of potential" was a key phrase), and increasingly it looks like they might have the tunes and musical clout to be more than a fleeting shot in the arm for rock...

Son of country legend Willie Nelson, Lukas has been doing pretty bloody well on his own terms with Promise of The Real. This new track mixes soaring blue-collar tones with rootsy warmth and an instantly loveable tune. If the new world order were established by the current country rock class of Nashville, and overseen by Bruce Springsteen, this could be the soundtrack.

Full disclosure: we initially wanted to include this because it's by a band called Nice Biscuit. But we're happy to report that the song is a cracker as well - part of a seemingly growing collective of extremely laid-back Aussie hippies (Babe Rainbow are another good example) that have stepped on from the psych pop/rock of Tame Impala, Pond and co and made it way more chilled. Nice.