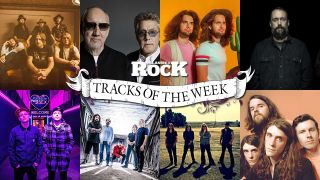 Hearing great new tunes for the first time is easily one of our favourite things here at Classic Rock. So it always gives us great pleasure to compile and share our Tracks Of The Week with you guys (even if narrowing it down to eight tunes is a bitch of a task), and see what you rate the highest. Last week a record number of you voted these bands into your top three, in reverse order:

1. The Cold Stares - Any Way The Wind Blows

Congratulations to The Cold Stares! And bravo to the Laurence Jones Band and The Dead Amigos, who both achieved very high scores to finish in second and third places. Now, let’s see who triumphs from this week’s hit list. You know what to do: crank up the eight tunes below (not all at the same time, unless you want a very ‘avant’ listening experience…) then vote for your favourite at the foot of this page. But first, a victory spin for last week’s champions:

Less than three minutes with not a second wasted, this is our favourite track on the Texans’ new album, and it’s ace. With guitarist John Jeffers on deliciously raw, shouted lead vocals (in place of frontman-in-chief Cody Cannon) it’s what the Beastie Boys might have sounded like if they’d made a southern rock record. A none-too-veiled boot in the face of shiny country pop radio fodder. Simple but oh-so effective.

The Who - Ball And Chain

It’s with some relief that we can report that The Who’s new single is a good ‘un (they’ve kept us waiting long enough, after all…). There are stirring touches of Baba O’Reilly and You Better You Bet (that inimitable mix of lusty acoustic strumming and plugged-in oomph that The Who have done so well in their later years), but Ball And Chain is no rip-off of past glories. Taut yet richly layered, it bodes well for the forthcoming LP.

Brooklyn-based twins Talor and Jordan Steinberg channel strains of the Tedeschi Trucks Band and Stevie Wonder in this dapper, funky foot-stomper. A tune with proper soul and guitar hero flourishes and a refrain that’ll stay with you forever… Oh yeah, and it really rocks. Check ‘em out, get involved, be happy.

As Maryland’s grooviest continue to reveal their Weathermaker Vault Series, we’re treated to a new recording of live classic Electric Worry (i.e. the super bluesy, raucous one with the chorus that goes ‘bang bang bang bang! Vamanos vamanos!’). With silent moments, more stripped back guitar tones and less production sheen all round, it’s almost as if the band were giving you your own private performance.

Centred on a stark, beautifully intimate acoustic performance from Ally Dickaty, this rendition of Northern Sun mixes hints of Neil Young with the Virginmarys’ own vignettes of passion and pain. Like what you hear? Check out this and much more good stuff on Deluxe Northern Sun Sessions, which is out on 4 October 2019.

Flying Colors are back with a brand new record, and a cracking new single that’s way less ‘prog’ than one might expect from a band led by members/ex-members of Dream Theater and Spock’s Beard. It’s no secret that Portnoy, Morse and co love the Beatles, and that’s seldom been more apparent than here – albeit with far more of a 70s vibe all round. Propelled by Casey McPherson’s lovable lead vocals (with elevating fairy dust in the form of immaculate multi-part harmonies), it’s a delight.

Sweet,  swinging southern rock’n’roll to finish, from...erm, Cumbria. But be in no doubt, these guys are the real deal. Taken from their next album, due in 2020, Running So Long is a dulcet humdinger of a track, complete with harmonised whiffs of Thin Lizzy.