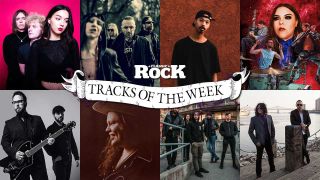 Every week brings new music – lots of new music – from across the rock spectrum. To curate this weekly round-up (in which you vote for the winner) we listen to songs from brand new faces, established veterans, the stars of today, the stars of tomorrow... and, of course, a whole load of great bands that had simply slipped under the radar.

Narrowing it down to eight top tracks is never easy, but we reckon you’ll find something that gets you going here; whether it’s the new single from new kids on the block (not those ones) The Mysterines or the rootsy tones of Marcus King. But first let’s see who you voted into last week’s top three:

3. Ozzy Osbourne - Under The Graveyard

1. The Last Internationale - Soul On Fire

Congratulations to The Last Internationale, who swayed the vote with their gorgeous  Soul On Fire! Honourable mentions also to H.e.a.t and Ozzy Osbourne for quality second and third place tunes each. Now, check out this week’s selection below, then vote for your favourite at the foot of this page. Before that, though, let's give last week’s first prize winners a spin...

The Mysterines – Who’s Ur Girl

This Liverpool trio make the sort of free, fizzing racket you’d hope to hear from three people in their late teens and early twenties – and then spruce it up with melodious layers of velvet and smoke. All fuzzy, hooky guitars, mystique and singalong chorus (think Blinders, BRMC…), it’s energetic yet sophisticated, without being smug. Catch ‘em on tour this month with The Amazons and Demob Happy, and on their own headline dates in 2020.

Backyard Babies - Yes To All No

Enjoy the more pensive side of the Swedish glam rockers with this driving, catchy highlight from latest album Sliver And Gold. A big, warm man-hug of a tune, pepped up with brooding vocals and BYB's own inimitable snarl, we can hear shades of Thin Lizzy and Blue Oyster Cult's Don't Fear The Reaper. Nice.

We loved this raw, garage-y lot when they burst onto our radar back in 2014. Back then they were a super-young sibling duo, making the kind of noise Blur might have made as angry kids with a load more noisy punk thrown in the mix. Fast forward five years and drummer Anaiah has left, leaving guitarist/singer Mikaiah Lei driving this swaggering, Gorillaz-nodding mix of scuzzy rock and sharp electronic beats.

The Carolina-born ‘young old soul’ has finished his first solo album (i.e. outside the popular Marcus King Band line-up), from which this oomphy yet loose boot-stomper is taken. It’s immediately rockier and more cocksure than his previous work, without losing the soulful gospel flavours he’s become known for. Like what you hear? The full album, El Dorado, comes out January 17 2020.

The Cold Stares - Into Black

A classy cocktail of Led Zeppelin-esque sensibilities and chunky, distorted blues rock from Nashville-based duo The Cold Stares (aka Chris Tapp and Brian Mullins). Their tone is good enough to eat – meaty and punchy, with enough dirt to keep it from sounding too slick – and the vibe of the main hook makes us think of the one in Black Dog. Which, frankly, is always a good thing.

You know you’ve got a) a great singer and b) a winning song when you still sound brilliant in a carpark, with only an acoustic guitar and a basic beat for back-up. It helps that Bang Bang Romeo also do an exquisite set of vocal harmonies, giving Love Yourself a prettier, fuller quality that would do gangbusters with huge crowds. If life was fair they’d be on the kind of stages occupied by the Coldplays of this world.

The Raven Age - The Face That Launched A Thousand Ships

London-based metallers The Raven Age are the brains, and chops, behind this heartfelt number. If you enjoy the emotional hard rock-meets-metal of Alter Bridge and Shinedown, you’ll love this – it’s rousing, heavy stuff without being overly ‘worthy’, and the chorus suggests they’re more than ready for the European arenas they’ll be playing with the two aforementioned bands in December.

The driving, singalong brainchild of Tony Cardenas-Montana (former multi-instrumentalist/backing vocalist with Great White) and Brentt Acrement (popular touring and session drummer and producer) has a whiff of 80s stadium rock about it, albeit with a much bluesier, rootsier undercurrent. You could imagine Richie Sambora or Slash jamming with Joe Bonamassa and coming up with something like this.