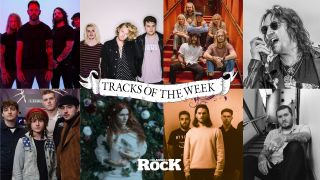 Want to find the best new rock music out there? Classic Rock is on hand with eight of the latest tunes worth your attention – selected every week from tonnes of contenders, and covering various shades of rock’n’roll. And every week we ask YOU to choose the best.

An enormous number of you voted in last week’s poll, placing these guys into the top three:

Congratulations to Naked Six! And hats off to Ramrod, who were hot on their heels in second place, and to Heather Findlay in third.

Check out this week’s selection, see who you rate the highest, then vote for your favourite at the foot of this page. Right after a spin of last week’s champions...

There’s a time and place for gently easing into a song, but this isn’t one of them. Scottish foursome The Lutras don’t leave you waiting, or wanting, for a second in this three-minute monster – boasting one of those simple, likeably cocky riffs that'll add some swagger to your step, or make you air-guitar at your desk...

Those Damn Crows - Set In Stone

The Welsh hard rockers have upped their game on new album Point Of No Return (set for release in February 2020), as this oomphy, galloping single confirms. Music to pump your fist, break speed-limits and tear the doors off buildings to – with your bare hands...

The great new track from progressive Leeds types KOYO flits effortlessly between gnarly Tool-esque weight and the sort of hazy dream pop you’d associate with Tame Impala. It’s a sharp, smart step forward from their initial burst of promise – bringing a new spirit of cerebral adventure, without sacrificing on melody or hookiness.

The Kate Bush-nodding singer with Russian chamber-prog act Iamthemorning releases her solo debut in the new year, from which this beautifully haunting single is taken. Mariana says of the song: “Everything Burns focuses on the demons that you take with you no matter how far you try to go; the fact is you just can't run away from them. No matter how hard you try to change everything around you, they will stay with you unless you realise that the most important change, the one that is by far the hardest to achieve - the one that happens inside of you.”

A meaty new tune from Sussex trio Saltlake, which soars as well as crunches. If Muse and Bullet For My Valentine went to an alt.rock night and had a baby, it might have turned out something like this. Vocalist/guitarist Henry Gottelier says: "Bitter Pill is a metaphor for the struggles of everyday life-being lost in a society that you just don't seem to fit into, and the anxiety that comes with that-being the person that someone relies on, but never having it returned."

These Aussie freakniks’ music has been described as “cruisey psych, rock and reggae fusion”. You can hear elements of all that in this trippy, more-ish number. In some ways it echoes the oddball pop stylings of their West Coast compatriots (Tame Impala, Pond…), but with a more organic sense of 70s/80s warmth.

Brian Fallon - You Have Stolen My Heart

One with which to chill/peace out/find your mellow happy place now. You can check out more from the Gaslight Anthem man on 2020 album Local Honey (and on tour in the US and UK/EU March-May), but for now we'll whet your appetite with this oh-so-pretty acoustically led number.