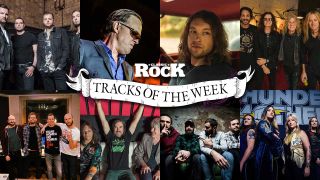 The rock gods have spoken, and it would appear that all is well – very well, in fact – in the world of new music that rocks and rolls. As such we've got eight first-rate rock tracks for you to check out this week (narrowed down from many, many more), which we hope you'll enjoy as much as we have.

Last week The Black Moods romped to victory in first place, followed by Of Limbo in second and Palaye Royale in third. Well done to all three of them! Check out TBM's scorching winning track Sunshine, then dive into this week's list and, as ever, vote for your favourite at the foot of the page....

One of the standout stars of Earache’s recent New Wave Of Rock And Roll compilation, The Dust Coda manage to sound furious and cool as hell on this groovy, enveloping new single. And when singer John Drake roars ‘there’s a demon in my heart!’ - part Axl Rose, part Chris Cornell (if he’d stepped on hot coals) - it doesn’t feel like a figure of speech so much as an actual bodily experience.

Check out music, merch and more

Joe Bonamassa - A Conversation With Alice

Taken from his forthcoming Abbey Road-recorded studio album (due out later this year), this new slide-infused track is one of Joe’s best yet. Inspired by therapy sessions, in which the guitarist/singer confronted some long-held demons, it cuts straight to the core with a winning melody, British classic rock tones (less technical blues noodling, more heartfelt Pete Townshend-esque chops) and soul-powered backing vocals.

Buy tour tickets I Check out music and merch

Buy tour tickets I Check out music, updates and more

Founded by Aussie guitarist/businessman David Lowy, and completed by a line-up that’s been continually changing since day one, the Dead Daisies' tunes haven’t always matched the chops. This time, however, they’ve nailed it. With newest recruit Glenn Hughes belting out vocals with the rigorous power and drive of a world-class athlete, Unspoken is the sound of a band hitting their stride and enjoying it.

The opening verse is pleasingly tension-building in a sweet, indie-ish sort of way, but it’s the chorus that really makes a case for these Brixton rockers. From those expansive foundations it builds up with cool backing vocals, soaring Britpoppy lead guitar lines and a refrain that’ll stick in your head for days. Nice.

Three Jellyfish alumni – with a collective CV that includes work with Cheap Trick, Sheryl Crow, the Finn Brothers and many more – have joined forces on this glittery pop-rock fiesta. Inspired by spirited research into dirty words of yore (‘fadoodle’ supposedly dates back to the 1660s), this ELO-nodding slice draws from the experience of Messrs Manning, Dover and Smith to delightful effect.

Now for something completely different, from the stoniest hole in Greece. Mirrors is one of the swarthier moments on 1000mods’ new record, Youth Of Dissent (think Alice In Chains and Kyuss baking to death in the desert, in a good way). One for when you just need to check the hell out from everything that’s going around you, for seven deliciously hazy minutes that pick up in pace and punch at just the right points.

Pre-order Youth Of Dissent I Check out band updates

Sometimes you just need a straight-up party song – one that isn’t afraid to take a load of age-old rock cliches by the horns and make something commanding out of them. Step forward Thundermother, sounding like women who’ve dined on Iron Maiden and AC/DC since they could hold cutlery, taking care of business in galloping, classic-rock-with-a-capital-C style.