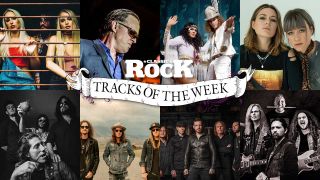 It's that time of the week when we review the cream of rock'n'roll's latest, and YOU tell us which one's the best. Whether you spot something by an old favourite of yours – or pick up on a band you'd never heard before – we hope there's something for you here.

Last week Cruel Hearts Club came out on top, followed by Massive Wagons in second place and Toby Jepson (aka Toby & The Whole Truth) in third. Well played, everyone! Check out CHC's winning single below, then dive into this week's list and vote for your favourite at the foot of the page.

The Cadillac Three - The Jam (+ Fuzz)

Originally released as part of the Country Fuzz album, this highly danceable 'choon has been roughened and amped up for this latest TC3 output. It had actually been poised to appear on the new Florida Georgia Line record (singer/guitarist Jaren Johnston co-wrote it with Brian Kelley from FGL) before winding up on Country Fuzz. Now oomphed with distortion, but still bouncy and funky as fuck, it’s all the things we want right now.

Ricky Warwick puts it best. “It’s a rocker!” the BSR frontman says. “A Scott Gorham and Christian Martucci guitar onslaught. A song about the politics of dancing while the politicians dance around the truth!” Indeed, the politicians part isn’t exactly veiled (‘I’m your candidate for heartbreak/come on and vote for me!...Build myself a higher wall!’ Warwick declares with venom) but Candidate For Heartbreak still carries the sort of no-bullshit rock energy and restorative catharsis we could all use sometimes.

Order the album Another State Of Grace

Goldray - How Do You Know

Since parting ways with 90s rockers Reef, guitarist Kenwyn House has dived head-first into a lava lamp-lit world of West Coast 60s psychedelia with singer Leah Rasmussen. On this commanding, tripped-out new single (part of a double A-side) Goldray mix flavours of Jefferson Airplane with Led Zeppelin-esque hoodoo. The fact that they look like they’ve stepped out of the Axis Bold As Love shoot – via some sort of gothic fairytale – reflects their immersion in these sounds. Not so much a fashion choice as a way of life.

Back Down South may initially seem like a fairly straight-ahead southern rock-come-blues banger. In truth it’s quite a bit smarter than that. Joined by singer Rebecca’s husband Tyler Bryant on guitar, the Lovell sisters build on stompy Georgia-fried rock’n’roll foundations with airy chorus harmonies – light as a feather and packed with soul – and the sort of lyrics that make well-worn bluesy tropes feel fresh and engaging again.

The brainchild of Lo (frontman of LA rockers Loading Data), these guys have said their music “could be the premonitory soundtrack to Roberto Rodriguez's next feature film, if it were set in a post-apocalyptic and degenerative Las Vegas where the only chance of salvation would be Barry White's resurrection.” This taste of their new album is moodier and smokier than (previous TOTW entry) Who Do You Dance For, but just as infectious – Lo’s 50s crooner purr goes brilliantly with the deep, desert-y grooves and 80s pop sensibilities at work.

Order the album, Room With A View

Marisa & The Moths have cut this acoustic-based rendition of Skin during lockdown. The high-octane original kicked ass, but the song sits excellently in this moody, atmospheric framework (cello and electric guitars playing off one another), singer Marisa Rodriguez channelling the likes of Lzzy Hale and Maria Brink at their most ballad-y.

Buy the self-titled debut album I Check out merchandise

Joe Bonamassa - When One Door Opens

Part love letter to the British blues boom, part Bond theme in the making (with its sweeping strings, hummable melody and brooding grandeur), Joe’s new single surprised us by sharply changing gear just over half-way through. From there a blast of military-march drums, chugging guitars and soul-belter backing vocals – which then dropped into a gentler finale – revealed a modern-day blues giant setting himself high standards (as a songwriter, not just a guitarist) and succeeding.

Gig/tour updates I Check out merchandise

You’d want to be the local radio announcer introducing this; “and now, boys and girls, the new song from Vandenberg... Shitstorm!” Adrian Vandenberg wears his 80s Whitesnake tenure on his sleeve here, riffing out while Chilean singer (also of present-day Rainbow) Ronnie Romero cries out ‘riding in a shitstorm!’ over and over. It’s sort of idiotic and yet awesome and we kind of love it.

Order or stream the new album 2020