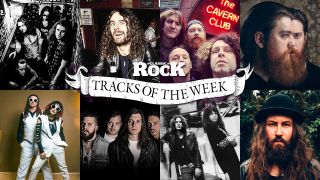 Another week at rock's coalface, another raft of brand new tunes to choose from for Classic Rock's Tracks Of The Week. For most of us who work here there's nothing quite like hearing something new and killer for the first time, and our weekly round-up is a great way to get a taster of what's out there – i.e. a lot. Rock's dead eh? Erm... not so much.

But first, onto the business of last week's top three:

Congratulations H.e.a.t, who's winning track One By One hasn't really left our heads since we first checked it out last week. Nor have the excellent second and third place tracks by The Struts and The Who, come to think of it... Anyhoo, check out the tasty treats below, stroke your chin thoughtfully, then vote for your favourite at the foot of this page.

But first, over to last week's champions H.e.a.t...

Station – A Matter Of Time

Remember when rock’n’roll was bigger, bolder and catchier than any other music out there? When guitars rocked harder and shined brighter, and a sporting level of cheese was always considered a good thing? New York’s Station do, and they want everyone this side of the 80s to experience it. A Matter Of Time will light up your sound system like a musical Christmas tree, and have you making a note to check out the full album (Stained Glass, on sale November 1).

From one weekday party-starter to another, the latest single from the good-time Aussie shitkickers upcoming album, Boneshaker, is the kind of tuneage that would make any drive more fun (though it might also make you spin off the road, mid-mosh/air-guitar). Think of the leanest, happiest, most dance-friendly end of Bon-era AC/DC, and you’re in the right ballpark. Listen, inhale, feel glad.

A cuban heel-stomping swirl of psychedelic boogieing, hippie vibes and hooky rock’n’roll now from Bath’s finest Ulysses. There are woozy freak-outs and trippy projections going on, but as ever the tune is the thing with these guys – bringing you riffing back down to earth just before you spin off into the video’s technicolour kaleidoscope...

Not a cover of the Stevie Ray Vaughan track, but something rather more intriguing… If the Beastie Boys collaborated with The White Stripes for a cover of My Doorbell, it might have sounded like this. Complete with identical Amish beards, Brit duo Cellar Door Moon Crow stand out visually, and based on this gutsy, jutting tune, it seems they have the music to match.

Primarily touted as the proteges of Dave Mustaine (the Megadeth mastermind produced this), Louisiana’s Watermox mix lean, mean thrash flavours with chunky but super-catchy classic rock – all wrapped up with an energy that stops them feeling cliched or tired. “This is what you dream of as a kid,” they say. “We live waiting for our next show to experience that special kind of synergy that happens between a band and their audience. It’s indescribable.”

Anyone expecting an actual farm of bats will be disappointed. If slick yet raw, stylish rock is what you're after – from a group dubbed "the premier darkedelic duo", no less – Batfarm should leave you smiling. Indeed, on paper they sound more weird and impenetrable than they actually are (their bio refers to "grunge and blues influences with rich, choral soundscapes" and "industrial, funk, and psychedelic music"), if this more-ish, Garbage-nodding number is anything to go by. Nice.

A change of pace now, with this acoustic-based new single from Last Internationale. Part East Village folknik protest, part Susan Tedeschi soul... it's not hard to see why Tom Morello (their executive producer) has called them one of his favourites "in the next wave of rebel rockers." Like what you hear? Check out more on their new album, Soul On Fire, on November 8.

Jack's new album Who Feeds The Wolf? is out on Friday, so why not whet your appetite with this latest slice? Dark country hints and straight-up bluesy rock guitars provide a confident foundation, but it's the dreamy backing vocals and pensive melody shift of the chorus that really takes this one up a gear. Nice.