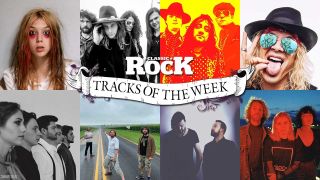 Another week has come to pass, and we've spent the morning panning for gold in rock's mighty rivers. We've come up with eight absolute nuggets, but first here's last week's podium of rock success. If you voted, thank you.

3. Samantha Fish - Kill Or Be Kind

So congratulations to The Darkness, whose Heart Explodes video was shot as the Lowestoft legends battled for hearts and minds at a run of recent shows supporting pop goliath Ed Sheeran. We'll have a full report on one of those shows in the next issue of Classic Rock, but in the meantime? Here's the video again.

And don't forget to vote for this week's favourite!

If you thought these rising LA stars were all blood-spitting, Ozzy n’ Alice Cooper horrorshow theatrics, this’ll make you think again. No More Pennies is lusciously dreamy and hooky, like the sweetest (yet strangely worldly) thing grunge never had, but wished it did. Proof, as with so much on upcoming album Devour You, that there’s ample substance behind the style.

We first met this lot back in July, when their When I'm Gone single featured in the Tracks Of The Week roundup, and now they're back with Rolling 7s, which starts off as an atmospheric slow blues before launching itself into the stratosphere as it heads towards a decidedly funky chorus. Frontman Marc LaBelle is the owner of a fearsome set of pipes, and if Greta Van Fleet are too Zeppalike for your tastes, then a taste of Dirty Honey might be just the thing.

There's something of the New York Dolls going on with this, with a scratchy riff borne aloft by a delightfully rousing chorus. It conjures up images of scuzzy Lower East Side dive bars before that part of Manhattan was gentrified, so you may be surprised to learn that the band are actually from the West Midlands.

Bemoaning a Steel Panther single for being unintelligent is like complaining that AC/DC’s songs are too samey – largely true, but totally beside the point. Fuck Everybody is galactically stupid (it’s called Fuck Everybody for chrissake...) but it’s also mega catchy, and delivered with such a level of spark, slickness and wide-eyed fun that we found ourselves replaying it several times this morning. You will recoil in distaste. And then, chances are, you’ll laugh anyway.

Wille & The Bandits - Victim Of The Night

Proper grown-up blues rock from Wille & The Bandits, with a big production, some lovely guitar work, and some even lovelier backing vocals. It's from the band's recent Paths album, described by the band's earth-based representative as "a breath of fresh air challenging the listener while embracing technology and instrumental possibilities that are afforded to musicians in current times." Wow!

Mission Jupiter - The Sea Of Hopes

Theatrical “alternative dream rock” that doesn’t veer into waffly self-indulgence? Now that’s something we can get on board with. If [Russian chamber-prog duo] Iamthemorning had a prog metal makeover, and listened to a load of Massive Attack they’d probably sound like this gang from Belarus.

The Survival Code - The Innocent

A tasty, punchy slab of modern rock from London now; the full-sounding kind of ‘choon that makes you struggle to believe it’s really the work of only two people (in a good, impressed way). Think Foo Fighters-meets-Buck Rogers-era Feeder, but fizzier and scuzzier. Nice.

This Brighton-based trio have written one of our favourite lyrics of the week – the wry, louchely delivered ‘Don’t wanna be a woman with a smile like flat champagne’ – but that’s not the only reason you should check this out. Raw and noisily atmospheric (and super melodic) its blend of Sonic Youth-esque sensibilities and hazy, grungy pop rock recalls the best bits of the 90s. And it’s all capped off with Projector’s own lyrical urgency.