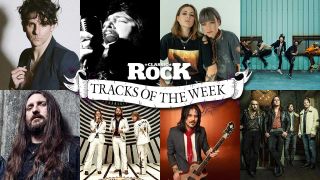 If music be the food of love, scroll on down and get yourself some new tunes...or something. The world might still be in a weird state, but there's a tonne of good rock  out there. We've assembled eight of the best tracks, which you can check out here – not forgetting to vote for your favourite at the foot of this page.

Last week you voted Joe Bonamassa your number one track of choice, followed by Cory Marks in second place and The Dead Daisies in third. So let's check out our champion Joe's winning track, the excellent A Conversation With Alice, then get stuck into this week's list.

Philadelphia’s piano-boogieing rock’n’roll posse return with this sassy cocktail of grit, sleaze and sweetness. It’s also a beguilingly intimate ode to lives behind closed doors: "I am fascinated by how people live, what they do to get by day-to-day, and what they choose to show the world,” says Adam Weiner, the brains, keys and voice behind LCC. “The outward-facing world, that is our culture... but what I'm interested in is what we call subculture... private lives."

Hailing from Brazil, but masterminded by London-based guitarist/producer/main-man Muca, The Beatflux make the sort of noise you’d imagine coming out of an on-form Stone Temple Pilots session, with an underbelly of Sabbath-esque dirt. Time to grow your hair really long and party like it’s 1992. Yeah.

Their tour plans might have been put on hold, but that’s not stopped these bluesy sisters rocking the hell out of their Nashville digs – with cool covers, how-to guitar videos and delicious cuts from their new album, like this. Keep Diggin’ is a sweet-yet-salty barrelful of handclaps, slide licks and chorus harmonies that we can’t get enough of. Get in and get your fix.

Anyone still labouring under the illusion that The Texas Gentlemen are a bunch of Route One southern rock hicks is in for a serious awakening. Taken from their forthcoming album Floor It!! (out on July 17), Ain’t Nothin’ New channels early Steely Dan and bits of the Beach Boys with its seamless swirl of honeyed americana, warm harmonies, jazzy rhythmic qualities and searing twin-lead guitars. They don’t make ‘em like this anymore, y’say? Yes they do.

Really miss going to gigs? You need this. As part of their upcoming live album, Orange Goblin take you straight to the heart of the action in this fast and furious new video (onstage, offstage, in the crowd…). No frills or fucking around, just balls-to-the-wall rocking out. Still, from the overlords of Britain’s heavy underground – and heirs to the Motorhead throne of filth – you’d expect nothing less. Best enjoyed loud, with beer.

Dutch trio Dewolff like to try new things; like record an entire album on the road, and ditch trademark instrumental layers in favour of whatever cheap, old-school tools they can shove in a tour van (check out the results on Tascam Tapes). This oh-so-groovy swaggerfest hails the return of said trademark – i.e. the Hammond organ – and was originally written for a European Škoda car commercial. It’s easy to imagine it in such a setting, but we’re very happy just bobbing along to it at our desk.

The former GN’R guitarist makes like the Rolling Stones getting up to mischief with Thin Lizzy, on the Sunset Strip, on this peacock-strutting slice of his forthcoming new album – which is due later this year. More-ish chops, irresistible soloing, decadence, motorbikes... it's all here, man. Pour yourself a drink and get involved.

We'll leave you with something to sway your lighters/smartphone lights/flaming torches along to, courtesy of Swiss rockers Daxx & Roxane. A heartfelt swell of heavyweight emotion, it's packed with the kind of guilt-free feels that nod to the likes of Def Leppard, Guns N' Roses and Inglorious (unsurprisingly; it was produced by the latter's former guitarist).

Pick up music and merch I Check out band updates