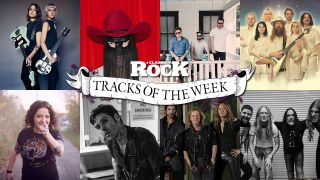 It's almost the end of the year (and the decade), but before we sign off until 2020 we've got the best new rock tracks you need to hear right now. With appearances from exciting young faces like Larkin Poe and Broken Witt Rebels, as well as veterans like Revolution Saints, we're going out on a high with this lot.

But who will secure your vote (in our handy, user-friendly poll at the foot of this page)? Last week the following three earned the most votes, in reverse order:

Congratulations Donnie Vie, who romped to victory with Beautiful Things! Very well-played also to The Lutras and Mariana Semkina on quality second and third place tunes. Have another spin of our winner below, then check out this week's selection below that – and vote for your favourite.

We'll return with the results, and more of the best new songs rock has to offer, in the new year. Until then, happy Christmas and enjoy the music!

Grammy-nominated sister duo Rebecca and Megan Lovell (aka Larkin Poe) have a whole lotta slide going on in this earthy, chain gang stomp of early blues and fresh-faced roots rock. Joe Walsh, and indeed the original blues kings and queens, would no doubt approve. If you enjoy the bluesy, garagey revival of bands like The Record Company and Tyler Bryant And The Shakedown – and have a particular fondness for their more primal old-school stuff – you’ll enjoy this.

A countrified enigma in a fringed Lone Ranger mask, Orville Peck was brought to our attention by our friends at Louder. This gorgeous slice of darkly seductive, bittersweet balladry comes with a video that leads you through an after-dark world of Nudie suits, tattooed cowboys, drag queens and on-tour japes in tour vans, diners and more. On one level it’s Chris Isaak-meets-Roy Orbison crooning, but mingled with a beautifully eloquent perspective on queer identity and a touch of 80s romanticism.

Inspired by a cosmopolitan rock cocktail of Rival Sons, Kaleo and Alabama Shakes – with a singer who make like Kings of Leon singer Caleb Followil – Brummie rockers Broken Witt Rebels have raised their game on this taste of upcoming album OK Hotel. Money sounds ready for big stages and swaying, singing-along crowds, and comes with the kind of chorus that’ll set up camp inside your head and stay there.

Church Of The Cosmic Skull - Sorcery And Sabotage

Imagine ELO at their perkiest having a party, in the early 70s, at a hippie rock festival, with Big Big Train, and a violin... Got that image in your head? Okay, now imagine all that embodied by one friendly ‘cult’, and crunched into one snappy classic-sounding pop rock song. This should give you an idea of what this new one from COTCS promises. Peace out...

One of the most commanding storytellers in Nashville right now, Arkansas-born McBryde may have certain tropes of a southern sweetheart (the dulcet pipes, the country melody) but she keeps it real in the most moving, on-the-nose way. With One Night Standards she’s created another evocative, guitar-strumming vignette of flawed humanity – involving a motel room key, infidelity and heartache.

You might recognise him as the frontman with British rockers Reigning Days, but this buzzy, stompy new earworm is from Daniel Steer’s self-titled solo debut. Part indie rock party hit (the cool kind), part QOTSA-esque firestarter – with classy vocal harmony touches peppering the verses – its one of those tunes that feels ripe for singalongs, while retaining a degree of mystique.

Revolution Saints - When The Heartache Has Gone

A barrelful of straight-to-the-gut melodic rock now, in a manner of which Journey would be proud – appropriately enough, given drummer/singer Deen Castronovo’s CV (and the rest of the guys’ past form with Whitesnake, Night Ranger and more). The video won’t win any prizes for insightful cinematic storytelling (it’s an attractive woman in short shorts walking around, lying on the floor, and gazing sadly at things) but the song is a winner.

Carcass - Under The Scalpel Blade

Okay, so Carcass are clearly on the heavy end of the Classic Rock spectrum. We know this. But we also really like this new single, and nothing screams ‘CHRISTMAS!’ quite like a furious, breakneck shot of extreme metal riffing and demonic death growls from the bowels of hell… Merry Christmas one and all!