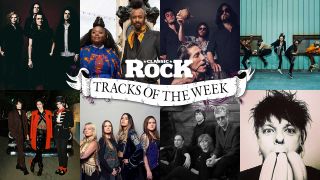 Looking for some new music to get excited about? Look no further; we’ve got you covered at Classic Rock’s Tracks Of The Week. Each week we compile an eight-strong shortlist (narrowed down from a lot more), the very best of which is chosen by YOU.

Last week Dead Posey soared to victory with the gritty, smouldering Parasite, followed by Jacob Reese Thornton in second place and Massive Wagons in third. Check out the winning single below, then get stuck into this week’s new selection and don’t forget to vote for your favourite – using the handy poll at the foot of this page.

We hope you enjoy them as much as we have!

The hotly tipped Californians are making good on their early promise (check out last year’s EP Place In Time, which saw them end up on tour with Slash and Deep Purple) with this summer festival-friendly anthem, complete with an animated video based on a contemporary retelling of Homer’s The Odyssey. "I knew I wanted to write a song about it, but I wanted to modernise it,” says singer Nick Reese. “I wanted to focus on the emotional and deep familial aspects of the story."

Featuring Tarriona "Tank" Ball from New Orleans ensemble Tank & The Bangas, the latest cut from Fantastic Negrito’s upcoming record is...well, fantastic. It’s almost as if Prince and TLC decided to get together, talk about modern life over some classic LPs, and see what happened. Like what you hear? There’s more coming soon...

Pre-order the new album Have You Lost Your Mind Yet?.

Patrón - Jump In The Fire

Groovy, woozy, sleazy matter now, laid on thick and led by languid, velvet-coated vocals so deep they make Johnny Cash sound a bit on the high side. So fat and juicy you'll wanna take a bite out of it. These Los Angeles desert rockers are described as “a sort of Frankenstein creature, borrowing as much from stoner rock, 50s rock’n’roll, the Rat Pack as from 80s pop”. We’d say that’s pretty spot-on.

Pick up their new album, Room With A View, out now.

The Texas Gentlemen - Train To Avesta

Something sweet now from the Lone Star State’s foremost hotshot session guys-turned-legit rock’n’roll band. With flawless harmonies, pretty keys and honeyed strings that could have come from a Tamla Motown session, it’s swoon-worthy stuff. The new album – their first really focused statement as a group in their own right – is out on July 17.

Pre-order the new album Floor It!!!

The Las Vegas rockers have gone all Mad Max for their latest single and video, and pulled it off brilliantly. “The world is getting so tainted by everyone trying to be so fucking perfect and so goddamn PG and trying to walk this line of not trying to offend anyone,” says singer Remington Leith, who (in the video) can be seen dragging a crucifix, tattooed and topless by a bonfire, and generally looking like a proper dystopian hard-ass. “People need to be themselves.” Amen to that.

Buy or stream the album, The Bastards, here.

Better known for tearaway ‘DC-come-Maiden anthems, Swedish rockers Thundermother have just released a big, chest-swelling, heartfelt power ballad. Co-written, like the rest of the new record, by all four band members, the not-so-secret weapon is Guernica Mancini, who proves herself to be a vocalist with tenderness and emotion – as well as the belting oomph of Driving In Style.

A gorgeous amalgamation of americana and country-kissed pop now, from the Jayhawks' most collaborative record yet. "This is a rare example of me writing a story song,” singer/guitarist Gary Louris explains. “I tend towards stream of consciousness writing, but Bitter Pill is a linear lyric that explores the tendency for some of always searching for the next fix of happiness, the missing piece...never being happy with what one has.”

Ed Sykes and The Sonic Oscillators - I'm Forever Losing You

We’ll leave you with this catchy, deceptively kaleidoscopic debut single from Colchester-based rock enigma Ed Sykes – joined by slick backing group The Sonic Oscillators. They might look like a group of retired punks but don't let that put you off. Part spiky glam, part psych-come-dub fest, this is a freaky yet groovy first impression.