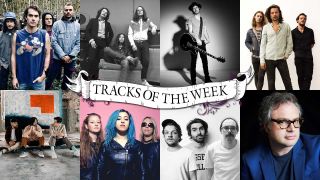 We love discovering new music here. Whether it's from established big cheeses or the next big thing, we're keen to listen to it all. The most exciting bit, however, is seeing what you lot rate the highest. We had another hefty turnout for last week’s poll; huge thanks to everyone who voted, below are your top three in reverse order…

1. The New Breed - The Young And The Reckless

Congratulations to The New Breed! And to Slash ft. Myles Kennedy & The Conspirators and Matt Zajic for hard-earned second and third places. So who's floating your boat this week? You know what to do; listen in, judge brutally, then vote for your favourite at the foot of this page. Right after you've had a spin of last week's first prize winners The New Breed. Enjoy...

All Them Witches – Fishbelly 86 Onions

We’ve got a lot of time for All Them Witches: easily one of the trippiest, coolest things going on Nashville at the moment. So we were delighted to find that their new single, a heady ‘dark fairground’ whirl of organ, deep guitar grooves and Doors-y hoodoo, is really rather good. What’s that title all about? Fuck knows. But maybe it’s just part of the baffling yet beguiling mystique they’ve got going on here, man...

Now for some boogie-soul rock’n’roll from Lockport, NY; taken from Handsome Jack’s upcoming album Everything’s Gonna Be Alright (out in October). There’s more than a hint of Creedence Clearwater Revival in the twangy, bluesy guitar at work here (even a little in Jamison Passuite’s vocals, which make us think more of Muscle Shoals circa 1969 than New York in 2018), and that’s just fine by us.

Walking Papers - This Is How It Ends

They may have all but lost Duff McKagan to Guns N’ Roses (let’s face it: this was always on the cards once they rebuilt bridges and got a tour together), but Walking Papers aren’t about to lower their standards. Far from it, if this darkly striking mesh of moodily atmospheric blues rock tones and smoky organ are anything to go by. Oh, and the new animated video is ace – featuring panels from a graphic novel of the same name, co-created by WP man Jeff Angell.

Strange but very cool sounds from Norway now, taken from this trio’s upcoming album Mint. The dominant vibe here is garagey blues but it’s way more nuanced than that; swirling tastes of jagged electronica, really good alt-pop and languid psychedelia. Apparently it’s also a homage to ‘Smokin’ Joe’ - the boxer who beat Muhammad Ali in 1971’s magnanimously dubbed ‘Fight Of The Century’ - but you wouldn’t get that from the animated video, which is all tripped out day-glo paranoia. Weird but deliciously so.

If American pop-rockers The Posies were a bit grittier – and Scottish, with their accents worn firmly on their sleeves – they might have sounded like this. Taken from upcoming album Sum Of All Your Parts, which goes on sale September 14, Charm School hits that enviable sweet spot between quality, cockle-warming pop and brooding rock edge. The overall effect is bittersweet but hooky and touching with it.

The Kut - Hollywood Rock And Roll

London-based rockers The Kut, the press release reads, “is the alter-ego of multi-instrumentalist and PhD Graduate, Princess Maha” – while live, and in this video, they’re a three-piece completed by Diana Bartmann on drums and Stella Vie on bass. This does make them sound a little more complicated than the straight-ahead hybrid of punk snarl and grungy rock’n’roll at work here (think L7, Brody Dalle, the riffier end of Riot Grrrl…) - taken from debut album Valley Of The Thorns. But it totally works, as Princess and co have a lovely time driving around Hollywood to the sound of their tried-and-tested yet appetising chops.

Pink Floyd had the Roman amphitheatre in Pompeii, these contemporary psych-prog rock dudes have a ski-jump arena in their native Austria… OK so it doesn’t immediately scream ‘stately progressive spectacle’, but actually it works really well - lending a certain otherworldly gravitas to this trio’s mix of trippy and riffed up qualities. It also explains why they’re all wrapped up very warm, and why there’s steam rising off their instruments...

We’ll leave you today with ex-Barenaked Ladies man Steven Page, and ALL the politics. Seriously, this video has it all: loads of hand-held footage from protests, cries to ‘resist’, no punches pulled whatsoever… But if you think this makes a po-faced affair, think again; White Noise is one of the bounciest new tunes we’ve heard all week, combining pop-rock, folky elements and lyrical anger to surprisingly feel-good effect.