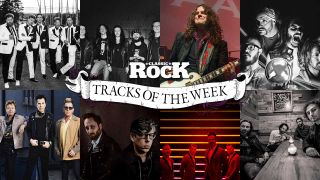 Hello movers, shakers and others, and welcome to this latest instalment of Classic Rock’s Tracks Of The Week. It’s a lip-smackingly satisfying mix of returning favourites and rising stars this Monday – featuring feel-good ‘disco rock’ from Sweden, heavy funk from Pennsylvania, familiar tones from rockabilly royalty... and much more besides. Frickin’ loads of you voted in last week’s poll, which saw the following bands make your top three. In reverse order they are:

Congratulations to Pröwess, who soared to victory on their TOTW debut! And a hearty ‘well-played’ to Buck & Evans and Lukas Nelson on excellent second and third place tunes.

You know what to do now; listen to the delectable selection below, stroke your chin thoughtfully, then vote with our handy, easy-to-use poll at the foot of this page. But first, let’s remind ourselves of last week’s winners Pröwess, with their winning track Lookin’ For A Bullet.

Enjoy the tunes, and (as two wise men once said) be excellent to each other...

Remember 2004? In the same year that gave us The Killers, Shaun Of The Dead and James Blunt, a group of Swedish dudes in black and white suits released their major label debut and went kinda viral with machine-gun pop rock struts like Walk Idiot Walk. Since their last album in 2012, however, it’s all been a bit quiet – until now. As this new single affirms, they are very much alive; slightly bittersweet with age (‘did you miss me, boys and girls? I crawled out of the underworld’ Pelle croons) but still roaring and smilingly stomp-tastic.

The Treatment - Luck Of The Draw

Bon Scott rears his head here (metaphorically speaking) on British rockers The Treatment’s frills-free track from new album Power Crazy – their first to feature new singer Tom Rampton. They’ve already toured with everyone from Alice Cooper to Slash, and weathered a bunch of line-up changes, but this feels like the work of a band hitting a new stride.

More Swedish-ness now, this time on the disco-geared end of the rock'n'roll spectrum. Adam Grahn and co go full 80s in this latest highlight from Club Majesty (on sale May 31). It's a lovable whirlwind of synths, hints of Prince (at his most dancefloor-friendly), and more so-awful-they’re-good fashion choices than Flashdance and Footloose combined. If you’ve got the blues, listen to this and you shall be cured.

Crobot - Keep Me Down

Our favourite funkateers from Pottsville, Pennsylvania are back with a bang – or rather, just under four minutes of face-smashing riffs, deliciously funked-up licks and weapons-grade cries from singer Brandon Yeagley (one of the most justified claimants to Dio’s throne of hard rock howling). Plus a load of unicorns, wolves, dinosaurs and other extras. Now flanked by a kick-ass new drummer, Texas sticks-man Dan Ryan, they’re in a good place for the release of their new album, due this summer.

Messrs Auerbach and Carney have gone for a somewhat back-to-basics approach for this latest new single – and it’s worked rather brilliantly. As the title of its parent album, Let’s Rock, suggests, the band are embracing the straight-up, hooky, bluesy rock’n’roll that made them so damn popular in the first place. Oh, and it comes with a great video depicting the band – po-faced and not speaking to each other – getting up to all kinds of weird shit at a hippie spiritual retreat.

Well, what a pleasant surprise this was. Rather than trotting out some sort of nice-but-predictable reissue package, Brian Setzer and co are celebrating their 40th anniversary with their first new album in 26 years (out this week). As this stylish, snappy number confirms, they’ve most definitely still got it.

Fuzzy, sleazy glam rock’n’roll that’s been described as “70s Glam Rock on the early 80s Sunset Strip” – which is pretty bang on, if this cocksure, strutting new track is anything to go by. The brainchild of Canadian singer/guitarist/songwriter/author Sean Kelly - also known as Lee Aaron's guitarist –  it’s the sound of salacious goings-on in grimy but glamorous surroundings, albeit with tongue firmly in cheek.

Pearl Handled Revolver - In My Blood

And now for something a little freakier to finish. Mixing electronics and darkly bluesy undertones in one psychedelic batter, Pearl Handled Revolver make the kind of noise Nick Cave or The White Buffalo may have come up with – if they’d spent some time jamming with the prog-rock glitterati of the 70s. Like what you hear? Find more on their fourth album, Fantasy Reigns, which is due in July.